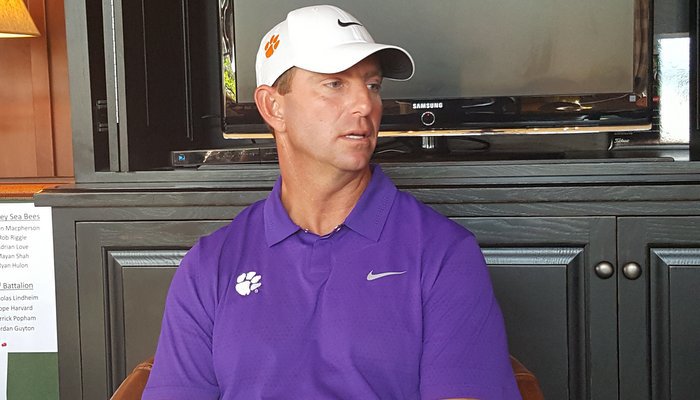 SUNSET – Fresh off the golf course and a meal on the veranda of the clubhouse at The Reserve at Lake Keowee, Clemson head coach Dabo Swinney

Dabo Swinney
Head Coach
View Full Profile sat down for almost an hour with the local media and covered a variety of topics concerning the 2015 season.

Deshaun Watson
So. Quarterback
#4 6-2, 205
Gainesville, GA
View Full Profile , and Swinney said that Watson will be a full-go when practice starts on August 4th.

“He's been full-go since May. He's done everything. You all didn't get to see him in the spring but he did a lot in the spring,” Swinney said. “We're as confident as you can possibly be in a guy. He's done everything. He's not missed anything. He's been through all of the workouts, all of the skills and drills. He's an above and beyond guy. Whatever you tell him he needs to do, he's going to go above that. He looks great. He's had a great summer and he's excited about getting back out there. Yes [he's been cleared]. When we start in a couple of weeks, he'll be leading the charge with no restrictions and he's been doing everything. I've watched him sprint the hills. He's done everything in the weight room. He's ready to go.”

Alex Spence
RS Fr. Kicker
#47 6-2, 190
Florence, SC
View Full Profile because we felt like he was a guy we could go win championships with. I wish I had another year. I wish I didn't have to start out the year counting on him, but that's where we are. He has to do his part. It's a two-way street. We've got a job to do. He's got a job to do. You've got to always be prepared for your opportunity because you never know when it's going to come. I told the team the day after Ammon got in trouble, 'Hey we're sending Ammon home. He's not going to be here. You're not going to see him. It's an opportunity for you guys to step up. You older guys, take some of these younger guys under your wing and let's challenge them and push them.' Alex Spence has worked his butt off this summer. We've got Christian Groomes

Christian Groomes
RS Fr. Punter / Kicker
#39 5-9, 190
Central, SC
View Full Profile who I think is another capable guy who has competed hard. We're going to bring another young man in from Blythewood who actually tried out for us this spring. We'll have some legs out there and we'll have somebody ready to go. If we have to, we'll just go for it. There's nothing wrong with giving it to Deshaun Watson one more time.”

“That's the one area of our team that I'm going to challenge personally. It's a lot like a few years ago when I said the defensive line is the weak link of our team and those guys responded. That didn't sit well with Grady Jarrett

Grady Jarrett
Defensive Tackle (2011 - 2014)
#50 6-0, 290
Conyers, GA
View Full Profile and those guys, but that was the truth and the perception. I think that the tight ends are not a weak link. We're very talented and very deep. Last year was probably the first year since I've been head coach that our tight ends didn't have the production like we're used and like we need in all areas. That group has to step up.

“We're in much better shape there this year and now we need the production. Everybody has to take their game to the next level starting with Jordan Leggett

Jordan Leggett
Jr. Tight End
#16 6-5, 250
Navarre, FL
View Full Profile . I think he's primed to really have a big year. I'm excited about how he's worked and maturity wise he's in a better spot than where he's been.”

“Jay Jay is a guy that's back with us but he still owes me a little discipline from spring, academics, that I'll deal with at some point. He's had a pretty decent summer - probably the best summer he's had. He's a guy that I'm not really counting on him, because I'm not going to get my hopes up but if he will take the next step and make his mind up that he wants to be a fully committed Clemson Tiger and be a great player, he'll be a great player. I'm cautiously optimistic that he's turned that corner, but we'll see.”

“Ammon has never given us a minute’s problem. I've never had a problem with Ammon, ever. The guy does what he's supposed to do, but what a bad mistake. He embarrassed himself and embarrassed us, but I'm not going to throw him away because he made this one mistake. He's going to be dealt with and there's going to be some pretty severe consequences for him. If he handles his business he'll have a chance to learn and grow from it.”

“It's been solid. We'll meet with Joey Batson next week and we'll talk about every player on the roster - the good, the bad and the ugly - and where they are. He's had a solid off season. He's one of those guys that's never been a fully committed guy and that's why he's just been an okay player. He's had his moments. Very talented. Artavis Scott

Artavis Scott
So. Wide Receiver
#3 5-10, 190
Oldsmar, FL
View Full Profile isn't more talented, he's just more committed, so his results are a little different. You get what you earn.”

"Jay has to go earn it. Jay hasn't been with us this spring and he wasn't with us Summer 1, and those guys have separated. Jay is doing fine. He's doing good right now. We will go to work in camp and evaluate tape every day and if Jay Guillermo is fully focused and committed he will definitely be in the mix. It doesn't necessarily mean it's at center - it may be at guard. He's a guy that we will cross train at center and both guards. That is who he is and what he does."

“We are excited about Artavis and what he brings to the table. G-Hop (Hopper) is a guy that can help us in the return game. Ray-Ray (McCloud) is a guy that will get some early looks. He is a natural runner. But it's more than just running with the ball - it's decision making and it's a different deal when you run out there in front of 85,000 people. The ground starts shaking and that ball starts jumping. But you will see (Wayne) Gallman and Artavis and Ray-Ray. We have some weapons, and that's another area where we have to get better as a football team this year.”

Players who will surprise this season

T.J. Green
Jr. Safety
#15 6-3, 205
Sylacauga, AL
View Full Profile if I had to name just one guy that is primed to have a big year. When we say T.J. Green a lot of people don't know too much about him. He is a really talented football that not a lot of people know about. I think Cordrea Tankersley

Cordrea Tankersley
Jr. Defensive Back
#25 6-1, 195
Beech Island, SC
View Full Profile has a chance to have a big year for us this year. I like the look in his eye. On the offensive side, I hope it's Charone Peake

Charone Peake
Gr. Wide Receiver
#19 6-2, 205
Moore, SC
View Full Profile . What I've seen out of him, this is a big-time talent and he looks the best I've ever seen him. You just pull for a guy like that. He refused to give in. He doesn't have a knee brace and he is flying. I hope come November everyone is talking about Charone Peake. I hope Tyshon Dye

Tyshon Dye
RS So. Running Back
#22 5-11, 215
Elberton, GA
View Full Profile is another guy that people will talk about.”

Group that could surprise

“Last year I said they [defensive backs] would be the most improved group on our team, and they were. I think that group can be dominant with the speed and athleticism that we have in the secondary will hopefully allow us to grow up some of the guys up front. Collectively as a group with the experience and depth and overall speed and athleticism they will be there. The leadership is a question - who will replace Robert Smith

DeShawn Williams
Defensive Tackle (2011 - 2014)
#99 6-1, 295
Central, SC
View Full Profile ? But if I had to pick a group that would surprise people this year it would be our tight end group. I think we've got a hunger there that we didn't have and just more talent and depth and those types of things.”

“Shaq might be the best defensive lineman we have signed here. That might be a pretty strong statement. This year will be my 13th season at Clemson and I've seen some pretty good dudes come through here. We'll see. But this guy has the potential to be as good as anybody we've had. He's talented, has a huge motor, and a huge relentless personality but this guy is committed. He is a grinder, a worker. If you tell him to do something he's gonna do it.”