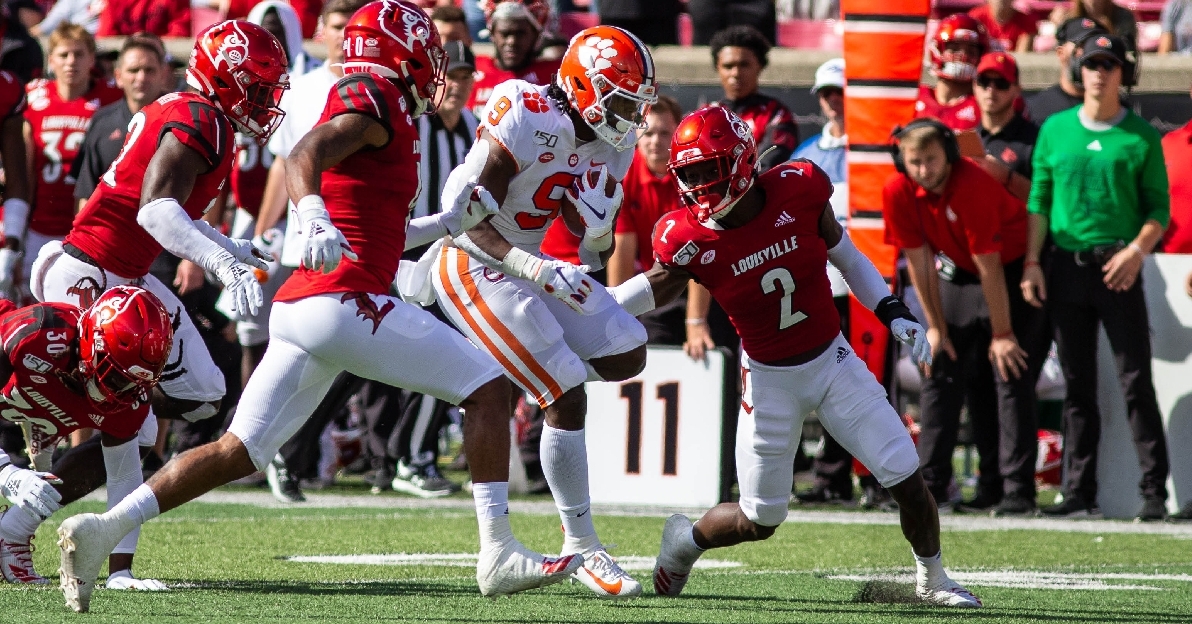 Etienne had 192 yards against the Cards.

Etienne, the Tigers’ superlative running back, broke free for a 48-yard run on the first play of the game for the Clemson offense, but was tracked down from behind by a Louisville defender. After the play Etienne went to the sideline and had to have his face cleaned. His entire face.

“When I broke free, I was looking up at the Jumbotron to see where the defense was,” Etienne said after the game. “When I looked up, all I saw was a big L on there, and when I looked over to see where they were, he caught me. I went face first and I had pieces of turf in my eyes and in my mouth and all over my mouthpiece. Turf 1, Travis nothing.”

The play didn’t deter the Louisiana native, who tallied 14 carries for 192 yards. Etienne said he tries to make the most of each carry.

“I don’t know why, but I feel like I go into the games with the mindset where I’m going to get the ball 20 times,” Etienne said. “But for me, it’s just making the most out of each carry. I can’t focus on the 30th carry if I haven’t done my best on the second one. So, just going out there and maximize my opportunity and try to do more with less.

“I feel like that’s what makes me great is going out there and being able to maximize my opportunity — no matter the situation or how the game’s going, just have that next-play mentality and just holding myself to a standard where I should go out there and play free.”

Etienne admittedly didn’t play well in Clemson’s one-point win at UNC a few weeks ago, but has since gained 319 yards on just 31 carries in games against Florida St. and Louisville. If you’re keeping score at home, that’s 10.3 yards per pop.

“I’m just getting back to myself and just being the best version of me,” Etienne said. “So, it’s kind of working out in my favor. That bye week, that UNC game, it kind of put it into perspective for me that you have to be great today and you can’t take things for granted, and just be blessed,” he said. “I play for Clemson football. It’s just crazy that I play for Clemson football, and not taking that for granted and just realizing that.”

Etienne left the game with an injury but said he should be good to go next week against Boston College.

“I had made a little cut and my foot landed awkward and my ankle kind of tweaked on me,” Etienne said. “It was like instant impact. I couldn’t put any pressure on it at that time, but when I got on the sideline, got across the field, I felt much better.”

On his last touchdown run of the day, a 49-yard scamper in the third quarter, Etienne didn’t look for the video board. He looked for the endzone.

“They (the defense) were close enough to where I could see them out of my periphery,” he said. “I just wanted to score there.”