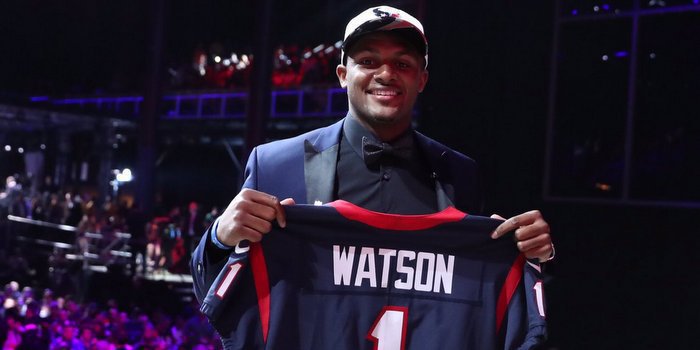 Watson smiles after being selected by the Texans

Deshaun Watson wasn’t the first quarterback selected in the NFL Draft, but he may have stepped into the best situation of any of the three signal callers drafted Thursday night.

North Carolina’s Mitch Trubisky went second overall to the Chicago Bears, Patrick Mahomes went to the Kansas City Chiefs with the tenth overall pick, but with the 12th overall pick of the NFL Draft it was Watson’s turn to hear his name called by NFL Commissioner Roger Goodell.

The Houston Texans traded up 13 spots with the Cleveland Browns to take Watson, and the former signal caller said receiving the phone call from the Texans’ general manager still doesn’t seem real.

"It was Rick Smith and then I got to talk to Coach (Bill) O'Brien. and (quarterbacks) Coach Ryan. Those two guys are the ones I talked to," Watson told the media in Philadelphia. "He just said, "Congratulations. We're happy to have you and get ready to come work.' It felt great. This is a blessing. It's a great opportunity for me and my family. This is surreal. It's crazy. I'm happy to finally know where I'm going to go and I can go there and put in the work. I'm ready to get down there tomorrow and start the process."

While Watson was hoping to be the first quarterback selected, he said he knew the situation would work out the way it was supposed to.

“Regardless of the situation, I was going to be motivated and I would be happy with any situation that comes,” Watson said. “I put in God's hands and this is where He wanted me to be. Everyone wants to go high, but going through this process it's all about timing and fate are the best things you can ask for. Whatever situation God put me in, I would be happy for it. This is the place He wanted me to be.”

Watson had a private workout with the Texans on April 17th and 18th, and he left Houston feeling confident about his performance.

“I was myself,” he said. “I just went in prepared, did everything they asked me to do, felt at home. I connected with all of the players. I just did what I was supposed to do.”

With the draft behind him, Watson said he’s excited to get to Houston and take the next step in his career.

“My focus is to get in and try to learn as quick as I can and play my role,” he said. “The defense on the other side is going to make me better whenever I'm competing against them. It will make the whole team better. It's a good thing to have.”

“They're getting a guy who is going to come in and work, play his role, learn from Tom Savage and Brandon Weeden,” he said. “I'll just keep my mouth shut and start working. Whenever my opportunity comes and my number is called, I'll take advantage of it. I can't wait to get to Houston and call it my city. I'm a confident player and whatever happens, happens as far as my role. I'm just going to go in there and work and see what happens.”