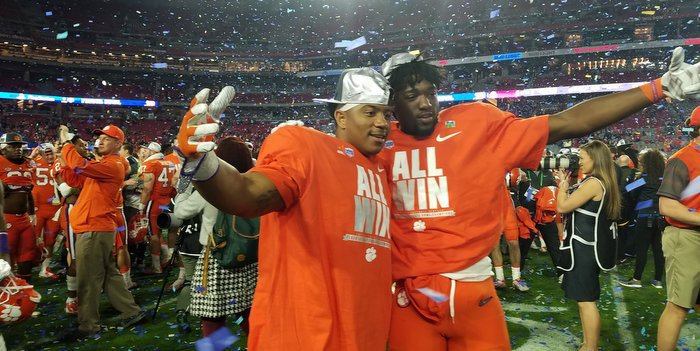 GLENDALE, AZ – When offensive coordinator Tony Elliott thought back to last season’s loss to Alabama in the National Championship, the first thing that came to mind was having to face a room full of heartbroken players and tell them that there would be better days.

He didn’t want to go through the same pain and see the same look in his players’ eyes after Saturday night’s Fiesta Bowl, and Elliott told the media before the game that one memory was his sole motivation for the 2016 postseason.

“The last memory I have is having to stand up in that locker room and address an offensive unit that gave everything that they had that came up a little bit short,” Elliott told TigerNet earlier this week.” That's been my motivation all year and telling those guys that I don't want to be in that position where I have to figure out what I have to say to you after a game like that, so that's one of the biggest memories.”

As it turns out, that motivation was enough.

When the celebration finally subsided, Elliott gathered the offense and made another heartfelt message – this one filled with excitement, togetherness, and true appreciation.

“It's a great feeling. What I told the guys this time - I made them get close to each other, touch each other and say we're back here because of you,” Elliott told the offensive unit after the game. “I thank you so much that I can stand up here and congratulate you on a win and not having to console you after coming up a little bit short. The reason we're here is because we're together and the reason we're going to have an opportunity potentially after the next game to celebrate as well is because of each other, so lets stay humble, let's stay focused and let's go live in the blessing that we asked for because we asked and we prayed for an opportunity to get back and now we're here. Let's be humble and let's go play like we appreciate the opportunity.”

With Clemson’s win over the Buckeyes, the Tigers will now face top-ranked Alabama in Tampa (FL) a week from Monday, and Elliott said the preparation for the Tide starts now.

“It will start tonight, so there will be no sleep,” Elliott said. “Sometimes having too much time to prepare is a bad thing because you can chase a lot of ghosts and you can do a lot of things that maybe not fit your system. I like the course of a game week because you've got to be detailed, you've got to be on point. You wish you have a couple of more days. We did lose maybe a day or two this year of preparation as opposed to last year, but our guys are going to fully commit to it.

However, he doesn’t have to do it alone, and despite the quick turnaround, there’s always a certain level of excitement that comes with playing in a championship.

“I've got to give a shout out to the coaches,” he said. “I know I get to stand in front of the camera and talk and you get to hear my voice, but if it weren't for Coach Caldwell, Coach Streeter and Coach Pearman on the offensive side of the ball and some of the young guys - they do an unbelievable job of helping me prepare throughout the course of the week. I'm looking forward to the challenge, and I think our guys will be excited to play.”