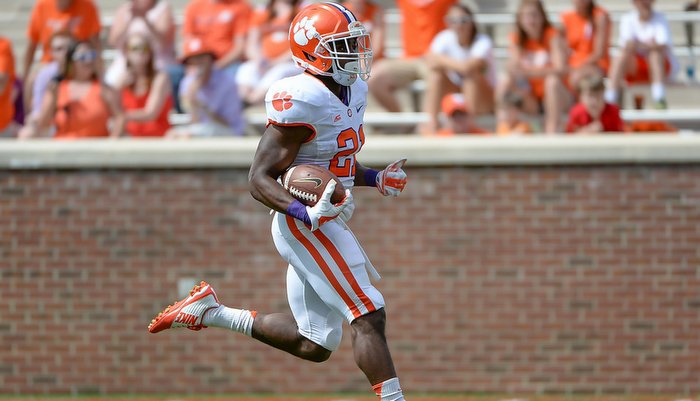 Davidson was the leading rusher in the spring game

Tony Elliott
Co-OC / Running Backs
View Full Profile stepped away from the usual football coach-speak Saturday afternoon when talking about his group of running backs following the spring game, instead choosing to rely on baseball terms when describing the group’s play.

The Tigers got a big day from C.J. Davidson

C.J. Davidson
RS Sr. Running Back
#21 5-10, 200
Clemson, SC
View Full Profile , who led all running backs with 100 yards and two scores as the victorious White squad rushed for 212 yards on the day. Davidson had a 54- yard run for a score in the second quarter that gave the White team a 28-10 lead. He had also scored on a one-yard run earlier in the contest. Wayne Gallman

Elliott said he was most pleased with the fact that the backs took what the defense allowed, comparing it to a baseball team getting base hits and not swinging for the fences.

“I thought they really ran well. They hit some home runs, but they also took the base hits,” Elliott said. “We talk a lot about just taking what is there. Sometimes there are only three or four yards there. If we can take those base hits then the home runs will come. They were able to read the safety fits and the linebacker fits and make some big plays. I thought if you look at the other side, Tyshon (Dye) ran really hard. I wanted to see Zac (Brooks) get loose a little bit more. I don't know what the situation was with him, but I thought he did try to stick it up in there and had some good runs. But on the other side that Tyshon was behind his pads and pushing the pile like we expected him to.”

Elliott said that Gallman – last season’s leading rusher – enters fall camp as the starter but that the rest of the depth chart is up for grabs.

“I think that Wayne will probably start and then the guys behind him are all pushing,” Elliott said. “Of course, I am saying that and hoping that Wayne doesn't get too big-headed or too confident in himself because he knows those guys are pushing him. They all bring something to the table and you feel good when you have that many guys that you feel like you can run any one of them out there and they will be able to execute the offense.”

Gallman had a 61-yard run early in the game, and Elliott said that while he's proud of the run Gallman has to learn to finish those runs.

“I thought Wayne had a good day,” he said. “I would like to see him put that long one in the end zone, in the scoring area. But that's one area that he has to challenge himself to get better because he's going break some runs, but I want him to finish it.”

Elliott said that Davidson – who missed the first part of spring practice with an injury – did what he needed to catch back into the conversation.

“C.J. had a good spring and he needed a spring because he missed the first half,” Elliott said. “Anytime you're in a situation where you have depth in a position, you cannot afford to miss any practices because those guys next to you, in front of you or behind you are constantly pushing you.”