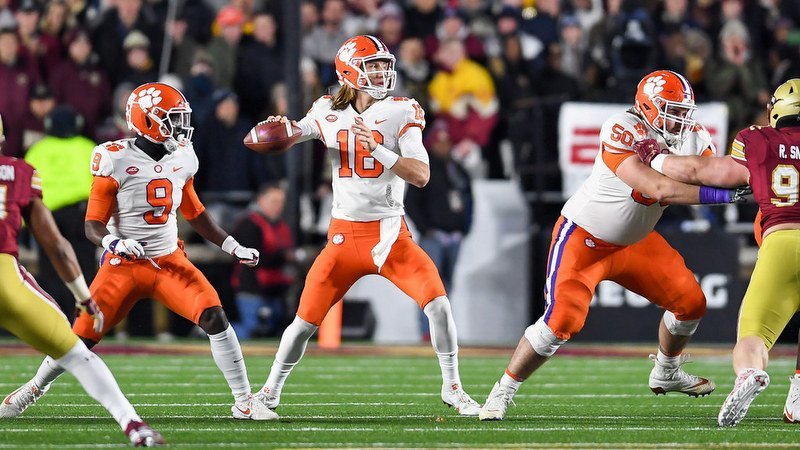 CLEMSON – Trevor Lawrence has helped lead No. 2 Clemson to a 10-0 record, setting program records along the way, and earned the leather helmet as the MVP of last weekend’s win over Boston College.

According to co-offensive coordinator Tony Elliott, Lawrence is only going to get better.

"He'll just continue to learn and get better. The great thing about Trevor from talking to Coach (Brandon) Streeter is a lot of times before Coach can even correct him, he's saying, 'Man, I know I should have done this.' You know that he's a very heady guy,” Elliott said Monday. “He's gonna learn. Another learning experience is when he had the screen to Travis (Etienne) that got batted - don't catch it, just bat it down. Again, he's got to play through that stuff, but he's gonna take ownership, and I would say that it's safe to say that we probably won't see those mistakes again."

In the win over the Eagles, Lawrence posted career highs in completions (29) and pass attempts (40) in throwing for 295 yards with one touchdown and one interception. He was the recipient of the Leather Helmet Award as the game’s most valuable player as awarded by the Boston College Gridiron Club.

During the contest, Lawrence broke Deshaun Watson's school record for total offense by a true freshman (1,666 in 2014). He also recorded his first career rushing touchdown on a six-yard scoring rush in the third quarter.

The bigger the game, the better Lawrence plays. He’s also showing a command of the offense.

"He just continues to get better and the bigger the moment, the better he plays,” Elliott said. “Just a little bit of insight - the play that we hit to Renfrow, Renfrow comes to the sideline and says, 'Look, I think this play is there.' So we said we were going to call it based off his recommendation. For Trevor to see that, and slide his protection to give himself more time, that's stuff that freshman quarterbacks don't do. Not just in that situation, but in that game plan, just the amount of things that we ask him to control and be able to prepare. He just continues to soak up the knowledge.”

Lawrence doesn’t get too high or too low and he has confidence in any situation out on the field. Lawrence’s demeanor reminds Elliott of two former Clemson greats – wide receiver Sammy Watkins (now with the Kansas City Chiefs) and quarterback Deshaun Watson (of the Houston Texans).

“His demeanor is the same every single day, and I think that makes him special,” Elliott said. “He has confidence and inspiration in his work, and I think that's why he performs at a high level. The great ones that have come through here - when you start talking about the great ones like Sammy Watkins and Deshaun, they have that same demeanor about themselves. Their confidence was from their preparation and their work, not necessarily from their performance on the field, but how they prepared to get ready."