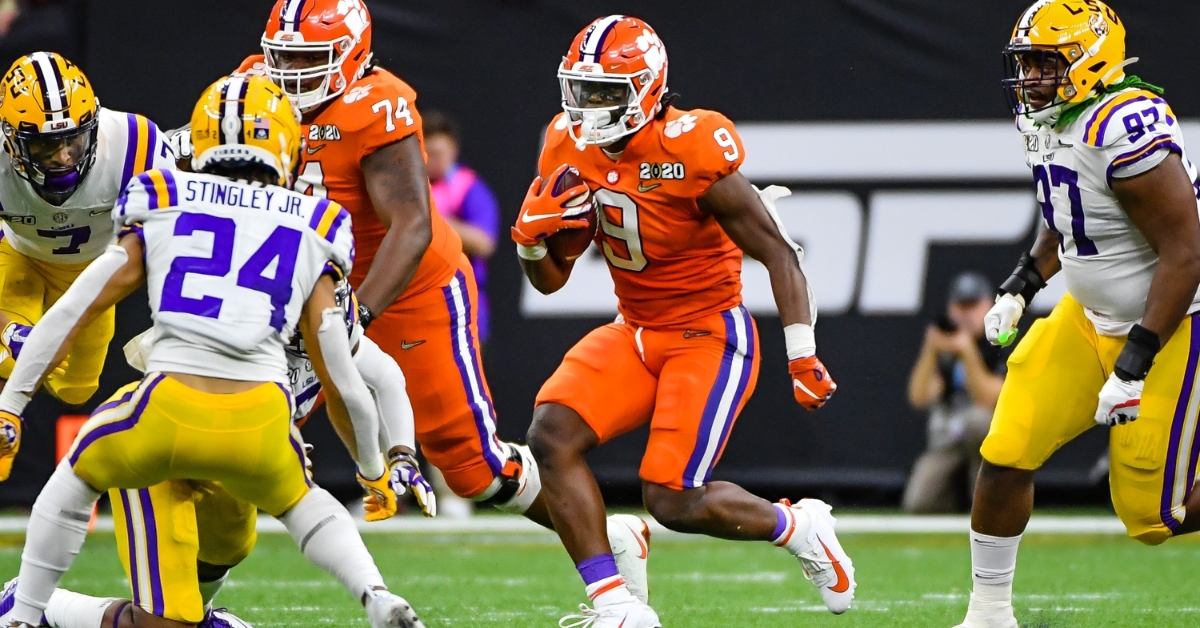 Etienne looks for yards in the first half.

Elliott’s offense was effective early, putting up 17 points and 289 total yards. Running back Travis Etienne carried the ball just once after the 10:49 mark of the third quarter and finished the night with 15 carries for 78 yards. He had five carries apiece in each of the first three quarters, but just that one in the final 25 minutes of the game.

Elliott said he knows he could have gotten his star a few more touches and also wished he would have given quarterback Trevor Lawrence a few more carries.

“You can always have 20-20 vision and hindsight but we knew that in this game. He was a guy we needed to get going in the running game and we needed to find him in the passing game,” Elliott said of Etienne. “He is one of the best playmakers on the team. And this game wasn't about the coaches, it was about us getting out of the way and letting the playmakers go make plays.

“I probably could have gone to the quarterback run a little earlier in the game. That maybe would have calmed Trevor down a little bit and caused us to be more efficient. We wanted to be aggressive and we wanted to attack and put the ball in the air. There were a couple of situations in there where I could have gone to a couple of more ball control plays to just put together some drives and possess the football and help the defense out.”

Clemson's Tigers were also just 1-for-11 on third down.

“I know the numbers weren't good. We only converted one time. There were a few of those where we didn't come down with the catch. They did a good job,” Elliott said. “There were times when we were explosive and we stayed ahead of the chains and we stayed out of third down. And then we were ineffective later on first and second down and that led to some long third downs, and that is whey they are at their best and can generate pressure.

“We had an opportunity tonight and we didn't take advantage of it. We didn't make the plays when we needed to make the plays. I am proud of the guys for their effort and how hard they worked and I told them I am a better person because I get to be around them every day.”

He then said that the LSU defensive line caused problems for Clemson’s offensive line and disrupted blocking schemes.

“They did a good job of mixing it up. Early on, we mistargeted on a few plays and then we got Trevor hit like he did in the Ohio State game,” Elliott said. “The back and offensive line weren't on the same page and that should have been picked up and we didn't and that might have caused Trevor to get flushed a little bit. They did a lot of twisting upfront and we didn't take advantage of the plays that were there.

“Early in the game, our rhythm was really good, but then we got out of rhythm and it's hard to pinpoint exactly what it was. And then we knew, too, playing in this game that we were playing against a great offense in LSU and that we needed to help our defense by scoring points and I think we started pressing a little bit, trying to do too much, not just at the quarterback position but at all positions.”