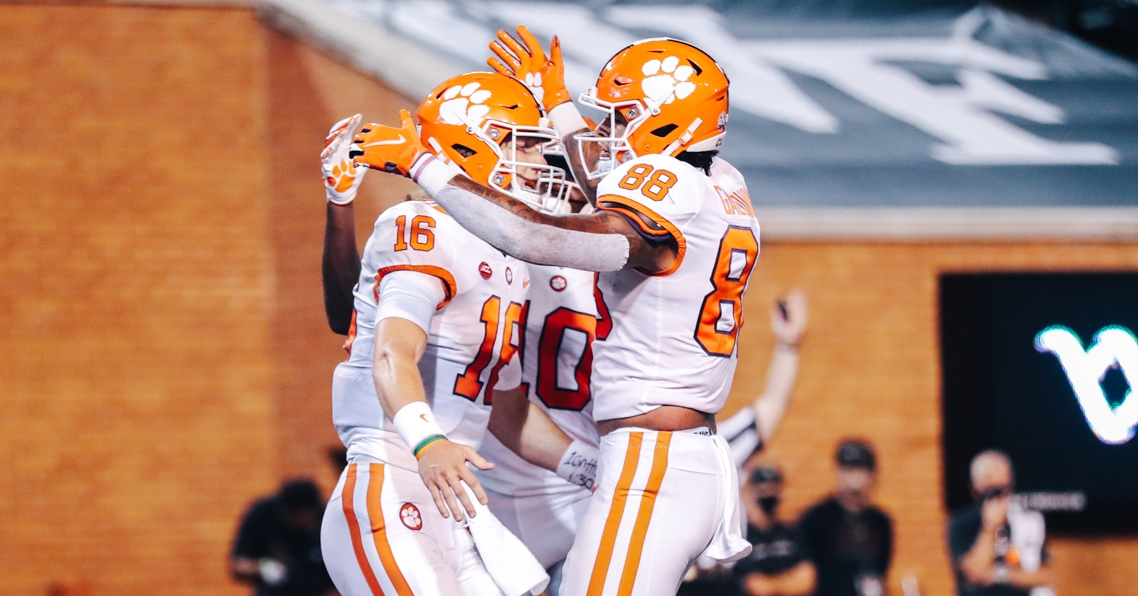 Clemson's offense got off to a strong start in Winston-Salem. (Photo per the ACC)

Tony Elliott has a lot to like about the Clemson offense after reviewing the week one video.

Clemson’s offensive coordinator met with the media Monday to break down the latest with the Tigers offense after a 37-13 win over Wake Forest Saturday and going into week two with The Citadel (4 p.m. Saturday/ACC Network).

Here are the quick highlights and notes, with more to come later:

* Elliott said the first-team OL set the tempo for the whole offense and the second-team OL learned some lessons but gave good effort. No major issues with that group other than typical first-game issues. He said they have their attention.

* Tempo is the DNA of the offense and Elliott says that was an emphasis over the offseason. He says they’re trying to get to the point where players are reacting instead of thinking post-snap and able to make plays on the fly faster. He said they have built-in more answers and Trevor Lawrence is “the best in the country” at processing those options and managing the tempo.

* Elliott said he thought the freshman RBs Kobe Pace and Demarckus Bowman “rose to the occasion.” He was pleased with the performance and it was valuable experience for them to have down the road.

* Elliott said Lawrence’s accuracy was on point. He was able to get into a rhythm quickly.

* He said freshman QB DJ Uiagalelei managed things well when he got in. Didn’t see anything on the field different than how well he performed in practice.

* Elliott said new starting right tackle Jordan McFadden is “a dancing bear” athletically but plays big and was “very, very encouraged” with his play. He said he is part of bringing that “nasty” demeanor to the Clemson offensive line.

* Elliott didn’t see conditioning issues from anybody after the odd offseason from a training standpoint.

* Elliott said it was “awesome” to see the tight ends featured more. He says the offense is at its best when the tight end is a major factor. He was impressed with Braden Galloway in the blocking game as well. The competition in the room has elevated the play of the TE group.

* In addition to Lyn-J Dixon, Elliott said that he expects Chez Mellusi and Mikey Dukes to be available Saturday to have a full seven-man RB group.

* Elliott reiterated what Dabo Swinney said Sunday about the fire of freshman tackle Walker Parks on the sidelines. Was impressed with him being serious, as well as coachable. He has a strong personality type and understands what it takes to be successful. He is already a leader.

* Elliott said they aren’t overlooking The Citadel and they will use opportunities as they come to give playing time down the roster. They’re focusing on Clemson first.

* Elliott said he talked to now USF coach and former Clemson co-offensive coordinator Jeff Scott and the two coaching staffs have talked some after the Bulls faced The Citadel last week (a 27-6 USF win). Elliott says they are looking forward to the challenge.