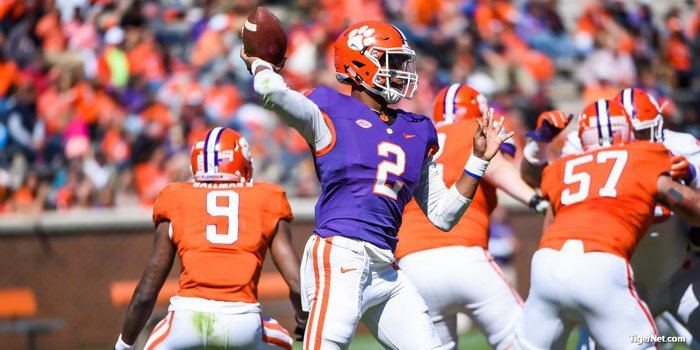 CLEMSON – Heading into the spring, there were no clear-cut second-team guys at both quarterback and running back, and the spring didn’t do a lot to clear up the competition.

Co-offensive coordinator Tony Elliott told the media following Saturday’s spring game that both competitions will last into fall practice as Kelly Bryant and Nick Schuessler go head-to-head behind Deshaun Watson. At running back, Adam Choice, Tyshon Dye and C.J. Fuller are vying for the spot behind starter Wayne Gallman.

Elliott said he likes the competition at running back, and he expects the battle to last until August or even beyond.

“It was competitive, and that is what I like to see,” he said. “We push them hard in practice. We wanted to see the guys when the lights came on. You saw Choice show up, you saw Fuller make some runs, and you even saw Dye break a couple. It's still going to be a tight race going into the summer and we won't be able to figure out that until the fall.”

Many expected Bryant to snare the backup job behind Watson – he would be the most experienced quarterback on the roster once Watson leaves after this season – but Elliott said Bryant still has work to do.

“He did some good things. There were a couple of downfield throws you would like to see better, and there could a be a situation where the receiver didn't do what he supposed to do,” Elliott said. “And then the deep ball he led the guy too far outside. There were some mechanical things. But to see him manage the system and work through his miscues was good. I am pleased with his progress, but he still has things to do.”

Overall, Elliott liked what he saw during the game.

“It was very competitive on both sides of the ball. It was hard to see what the other team was doing on the other side of the ball because I was focused on us, but I saw some good runs and some competitive catches,” he said. “Overall, it was pretty clean. We had a couple of miscues and a couple of turnovers we have to get cleaned up, but overall I am proud of the spring and proud of the way the guys went out and performed. I was even encouraged when we got the third team in there.

“It's tough in this situation because you don't have all the resources at your disposal, so you're coaching quarterbacks and running backs and wide receivers, so I will go back and watch the film and evaluate. Overall, the first impression is that the quarterbacks threw the ball well. We did have a couple of drops which would have helped their percentages, and the running backs ran hard. The tight ends were involved and had a couple of touchdowns and made some big plays, so it was good to see the ball distributed. Artavis Scott looked like a man on a mission.”

Elliott said the Tigers were able to achieve some of the goals he set before the spring.

“The first thing is touchdown efficiency. We didn't hit our goal in terms of overall percentage,” he said. “I wanted to see us build chemistry with our offensive line, and I wanted Mike Williams back in the fold and continue to get Wayne to take the next step in his progression. There were a lot of things we wanted to focus on, and the biggest thing was just getting back to basics and making sure we weren't expanding too much. We are adding some new guys to the mix, and we are really starting to develop that cohesion.”