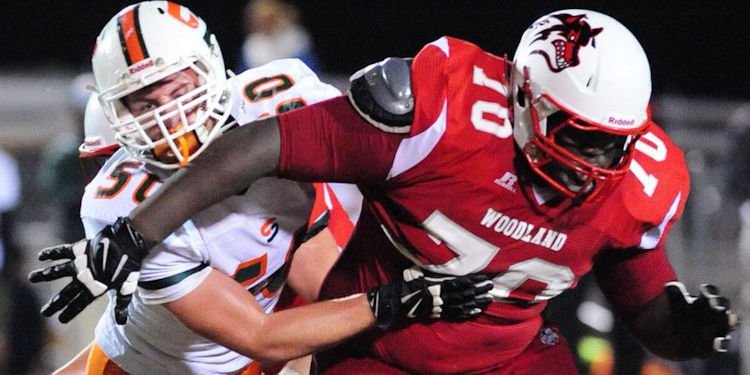 Not yet a high school junior, 6-foot-5 offensive tackle James Ohonba tips the scales at 320 pounds.

On the strength of an impressive sophomore highlight reel, Ohonba already boasts college offers from Alabama, Georgia, Tennessee, Stanford, Ohio State and Notre Dame, among others.

“It feels good,” Ohonba said of the offer from the Tigers. “It caught me by surprise. It's just another great option to look at going forward.”

He said January's national championship game impressed him based on Clemson's progress and ascension to college football's big time.

“They made a big jump because they weren't of that caliber in previous years,” he said.

Ohonba told TigerNet this week that with two seasons still to play in his high school career, he is still weighing his college football options. He listed Georgia, Alabama, Duke and Virginia Tech as schools of interest – “in no particular order.” He hasn't visited Clemson and said he's undecided on his plans for this summer.

On play after play in video highlights, Ohonba – who benches 305 pounds and lifts 485 in the squat – can be seen mowing down or containing opponents on either side of the ball. As a player, he describes himself as “very coachable” and envisions taking on a leadership role as he matures as an athlete.

“Once I'm taught something, I'm going to keep it,” he said. “And heading into my junior and senior year, I could be a potential leader of the offensive line, or even the offense, or even the team, if chosen by my teammates.”

He said his immediate goal is to help Woodland make a deep run in the Georgia football playoffs, adding that a more seasoned 2016 roster could make that a reality. The Wolfpack lost in the play-in game in 2015.

“They don't need to be like best buds, but you know, just being able to talk to them if you need to, if you need help. And have fun a little bit sometimes.”

And while he has yet to decide on a major, Ohonba said academics will definitely factor into his decision-making.

“I hope the people that I'm surrounded with are high on academics or at least doing well in academics,” he said.

Marion Hobby, co-defensive coordinator/defensive ends, is one of the Clemson coaches recruiting Ohonba.