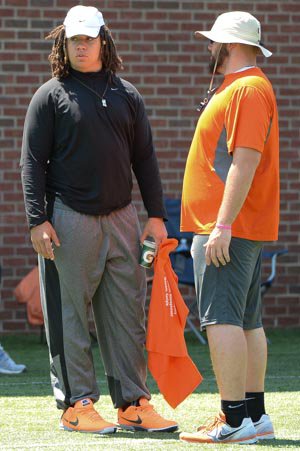 Could there be room in Clemson’s 2015 recruiting class for another 4-star offensive lineman?

View Full Profile out of Woodbridge (VA) C.D. Hylton. Burrell is rated as the No. 43 prospect overall in th ESPN 300, and is rated as the nation’s No. 4 offensive tackle by ESPN.

View Full Profile . Burrell spent a day-and-a-half on Clemson’s campus, touring the facilities and getting a better feel for Clemson’s coaches, and he told TigerNet earlier this week that the visit was all he could have hoped for.

“I loved it man. It was everything I thought it was before I went there and more,” he said. “I am glad I got to go down there and see what everybody was talking about.”

Burrell said that Smith did his part in trying to lure him to Clemson.

“I love Chad, man,” Burrell said. “Yeah, I have known him for some time now. That’s my boy. They are recruiting Tim hard, and me, too. And Chad was right there in the middle.”

Burrell said that it was good to see recruiter Dan Brooks

Dan Brooks
Assistant Coach / Defensive Line
View Full Profile , someone he is getting to know better each time they speak.

“That’s my guy, and we have grown closer over the time,” Burrell said of Brooks. “He reminds me of one of my older uncles, like he is a caring dude, funny and he knows his stuff, he treats me and Tim like we are his kids.”

Burrell said he spent time with the Clemson coaches and touring all of the facilities, but Clemson’s legendary hill is what stood out the most.

“The hill kind of shocked me to see it in person,” he said. “We all were kind of pumped to see it, and it’s bigger than I thought. And the weight room is nice but they said it will be even better.”

Burrell said he is planning to make a return visit – hopefully bringing his father back for the All-In Cookout in July after competing at Nike’s The Opening earlier that month.

Once that is over, he hopes to trim down his list even further, but said that Clemson has already made quite an impression and that people shouldn’t assume Alabama is the clear cut leader.

“Man, everyone tells me Alabama is my favorite,” he said. “But I loved visiting Clemson, and I feel they are a top choice, easily.”