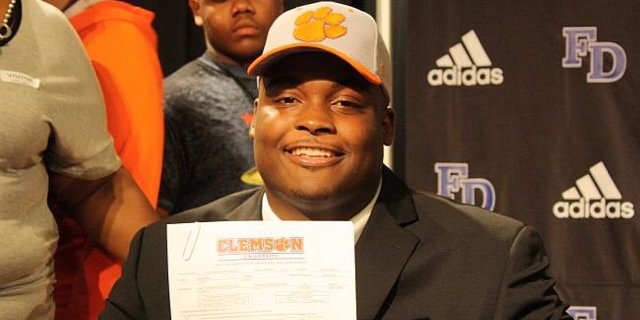 Simpson shows off his National Letter of Intent Wednesday

The offer list for John Simpson shows that he could have gone to almost any school in the country, but at the end of the day he followed his heart.

The 4-star North Charleston (SC) Fort Dorchester offensive lineman was long considered a strong lean to Clemson, and Simpson had made multiple trips to campus. However, Simpson also took Florida and LSU into heavy consideration and over recent weeks many wondered if Simpson's lack of a verbal to the Tigers meant he might be headed elsewhere.

Not a chance. Simpson held his hand over LSU, Florida and Clemson hats at a signing ceremony at his school Wednesday afternoon before finally picking up an orange and white hat with the familiar paw.

Simpson donned the hat and received a big cheer from those in attendance.

Simpson will enroll at Clemson over the summer, and he told TigerNet shortly after his commitment that he's glad the process is over, and he can concentrate on being the best he can be when June rolls around.

"I'm glad it's all over now so I can focus on one thing - getting better on and off the field with school and everything being a lot more," Simpson told TigerNet Wednesday afternoon. "I just want to get ready."

The 6-4, 288-pound offensive tackle said he had long thought that Clemson was the place for him, but he wanted to take his time with recruiting process just to make sure, but Saturday was when he finally realized he wanted to call Clemson home for the next four years.

"Clemson is the place that I really wanted to be. I was going to commit a long time ago, but I wasn't completely sure then," Simpson said. "I sat down and talked about it, and I realized that it's where I wanted to be and how much I really loved it. I knew Saturday that I was going to be a Tiger. I called Coach Swinney, and we talked about it and he told me that he was glad that I was ready to commit."

What was it about Clemson that put it above Florida and LSU?

"The family atmosphere. Me and the players just bonded so tight. There were a lot of things," he said. "I wanted to go to a place that I would have a good relationship with the players. It's an amazing company to be in with Clemson. I'm glad that I will have the opportunity to play for them."

#Clemson getting a good one. @BigJohn__16 today on why he chose the Tigers and @Coach_TElliott. #ALLIN #NSD2016 pic.twitter.com/03EZzdJXMO