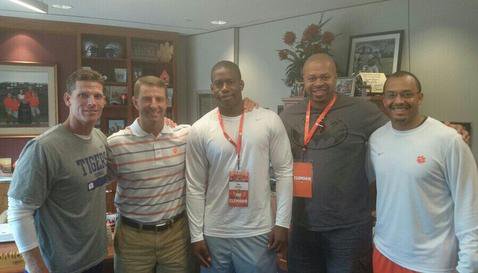 Lamar during his August Clemson visit

It has been a tale of two games for the Clemson Tigers, and Tre Lamar

View Full Profile has seen both.

The four-star standout linebacker out of Roswell (GA) was on hand for Clemson's fourth quarter dismantling in Athens to begin the season and then made the trip to see the Tigers home opener last weekend against South Carolina State.

"It was great to see their defense and how it works when they're playing well," Lamar told TigerNet Sunday afternoon. "In the game versus Georgia, they were doing well until the fourth quarter and that's when the dams opened up. Just seeing them finish the game, I liked that. It was good to see."

"He [Venables] just talked to me about what it would be like on game day if I were to go to Clemson - what the players do, how they get ready for games and stuff like that," Lamar said.

However the real reason Lamar took the time to come to Clemson was to see Death Valley come alive on game day.

"It went really good. My dad and I made the trip," Lamar said. "Being able to see the environment on game day and being able to talk to the coaches were probably the highlights for me. It impressed me that the stadium was still packed even though it was South Carolina State and a 12:30 game. I'm impressed with the environment there."

Lamar claims 15 offers, with Alabama, Clemson, Mississippi State and Vanderbilt are believed to be among his favorites.

"I don't have a decision date in stone," Lamar said. "I don't know when I want to commit anywhere. Clemson is definitely in the top five or six schools that I'm looking at right now."

During two games in 2014, Lamar has registered 13 tackles, four tackles for loss, one sack and one pass breakup.