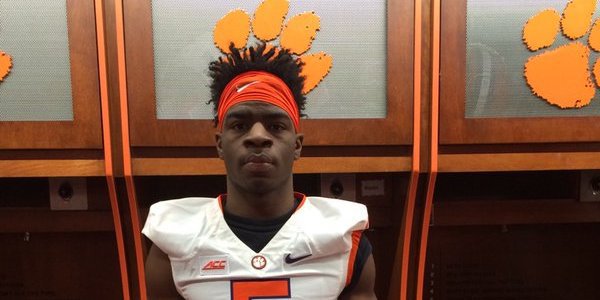 Bryant takes a pic in the Clemson locker room

After losing Shaq Lawson and Kevin Dodd to the NFL and signing just one defensive end in 2016, the Clemson coaching staff will look to the 2017 class to continue adding talented depth to its group of defensive ends.

Cordele (GA) Crisp County’s Markaviest Bryant is one of the coaching staff’s top targets to fill that void.

Bryant visited Clemson on January 30th for Clemson’s first junior day in 2016, and he told TigerNet he came away from the visit impressed and with all of his questions answered.

The 4-star prospect spent time with defensive ends coach Marion Hobby and he said the two are continuing to develop a relationship.

“I met him (Hobby) and from time to time we will have conversations,” Bryant said. “When I went up there, he taught me some things and showed me some things. He told me what kind of defensive scheme they have, how many players they have coming back, and how I would fit in their football scheme. I learned a lot. I really like him. We still talk. I even talked to him today. He's a good coach.”

Bryant – a 6-4, 228-pound weakside end prospect – said he enjoyed breaking down Clemson’s scheme and learning about how defensive coordinator Brent Venables would use him should he choose the Tigers.

“When I went campus, I had a one-on-one conversation with him (Venables). He came over there with me and he specifically told me that Clemson wasn't all about football that it is more about being a young man,” he said. “He told me some things, but first and foremost he told about my grades and how academics were going to go and then he told me about football and the schemes. He's the one who really laid out the defense to me and how it is. He really kind of helped me out and made me feel at home when I was there. He told me he would help me and he told me that it may take a little time to get into the defense but if I do come I'd be able to catch on easy.”

However, it may have been Dabo Swinney that Bryant was most impressed with, especially since Clemson’s head coach reminds Bryant of his high school coach.

“He's (Swinney) a cool guy. He's not serious all of the time,” he said. “He's a laidback guy. He handles himself well. He's a confident man. He really speaks his words. He talked me one-on-one at lunchtime when he came to my table. We talked about football and about getting in the weight room. I really relate to Coach Dabo Swinney because he's about like my head coach that I have right now.”

Bryant already holds offers from Alabama, Cincinnati, Clemson, Florida, Florida State, Georgia, Georgia Southern, Georgia State, Georgia Tech, Kentucky, Mississippi, South Carolina, Tennessee and Troy. With just under a year until National Signing Day, Bryant is taking his time with the recruiting process and taking the advice of those around him to keep an open mind.

Bryant amassed 73 tackles and 10 sacks during his 10-game junior campaign.