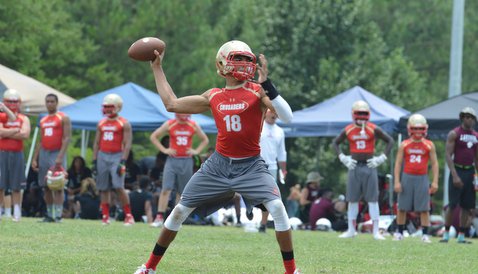 DUNCAN – Jarrett Guarantano is known around New Jersey as a big-time passer, but don’t let his 6-2, 190-pound frame and pro-style classification deceive you - he has no problem running the ball.

Guarantano is out of Oradell (NJ) Bergen Catholic, and he made his way down to South Carolina for the Byrnes High School Palmetto Showdown 7-on-7 recently and put on a show making all of the throws – short passes, passes into coverage and passes at the back of the endzone.

“I coached a kid by the name of Tanner McEvoy who has the chance to be the quarterback at Wisconsin this year. Very similar type of player,” Nunzio told TigerNet recently. “Tanner is a very similar type of athlete. Jay is a little more developed skill wise because Tanner only played one year of high school quarterback. As far as athletic skills - great arm, really can run, tall, the whole thing. Arm talent - he's very similar to Coach Mike Teel and Matt Simms of Don Bosco. They were really big time throwers as high school kids. He's interesting. He can throw it like a big-time passer, but he can scoot too.”

As a sophomore Guarantano completed 39-of-80 passes for 449 yards, two touchdowns and three interceptions, while also rushing for two scores. Nunzio said with his dedication and continued hard work he believes that Guarantano could be a special talent.

“I think this tournament was great for him - getting to play 12 games and come out and pitch it around a lot to develop some timing and stuff like that,” Nunzio said. “He's got tremendous talent. He's working everyday to get better. He's just going to keep getting better. Between his talent level and his work ethic, he's got a chance to be a really tremendous talent.”

Rutgers first offered the 2016 prospect as a freshman and since then Guarantano has received offers from Clemson, Ohio State, UCLA and 20 other schools from across the country.

“He got offered by Rutgers his freshman year, which was a little crazy,” Nunzio said. “His dad played there. They knew he was a tremendous talent. It was just a matter of time. Right after the season a couple of teams started flirting with him and then it was like dominoes - one right after another. I think people realize they better get in on this and figure out what type of kid he is. I think a lot of people are going to be really excited about the type of kid he is.”

Since Rutgers – his father’s Alma Mater – offered first, most would expect him to stay in New Jersey, however, Guarantano told TigerNet that’s simply not the case.

“I don't have to stay at a school in the North,” Guarantano told TigerNet recently. “It really doesn't matter where the school is located, I just want to go somewhere where I can have a chance to play in big games and win and be a part of a special offense.”

Guarantano visited Clemson over the spring on a tour of the Southeast and came away impressed with what the Tigers have to offer.

"Clemson was one of my first offers, and it was great getting an offer from a program like that,” Guarantano said. “I like what they do with their offense - it is very similar to what we run. I feel like I have a good relationship with the Clemson coaches. Coach Morris is a great coach who gets the most out his quarterbacks, and they get a lot of really good receivers to go there.”

Nunzio echoed those sentiments saying that Clemson will be a factor when it comes time for his star signal caller to make a decision.

“Absolutely. I know they are. I don't know ultimately what he's going to do, but I don't think he has any limitation on where he'll go,” Nunzio said. “I think it's about finding a place that's a great fit for him. I know when he came down here in the spring, he really loved it. He's got some family in North Carolina, so I don't think that's an issue for him at all.”