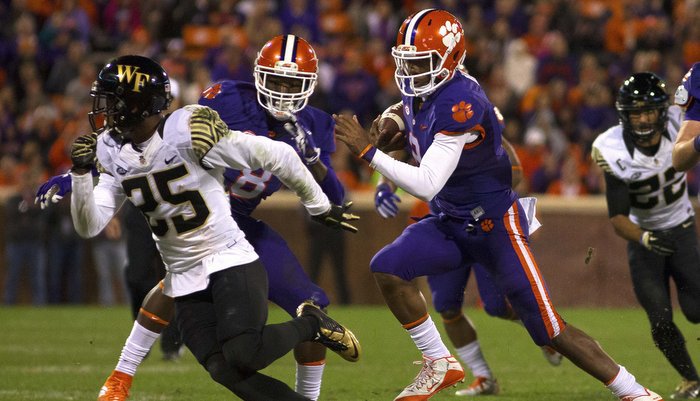 CLEMSON – Next up is South Carolina and the chance at 12-0.

No. 1 Clemson jumped out to a 20-0 lead and never looked back in defeating Wake Forest 33-13 Saturday afternoon in Death Valley on Senior Day and Military Appreciation Day. Clemson moved to 11-0 overall and 8-0 in the ACC, while Wake Forest fell to 3-8 and 1-6.

Clemson travels to Columbia next Saturday for a noon kickoff against arch-rival South Carolina, 23-22 losers to The Citadel Saturday. South Carolina is 3-8 on the season and has lost four in a row since mid-October.

The victory was the 700th in the history of the Clemson program, and the Tigers are now 63-17 all-time against Wake Forest. Clemson is also 8-0 in the ACC for the first time in program history. The senior class also has a 43-7 record, a Clemson record for a four-year span.

The victory was also the 72nd for head coach Dabo Swinney, who moves into a tie with Tommy Bowden on the Clemson victory list.

Deshaun Watson played a little more than three quarters and completed 21-of-30 passes for 304 yards, three touchdowns and two interceptions and rushed for 44 yards on 10 carries. Wide receiver Germone Hopper had arguably the best game of his career Saturday afternoon. finishing the day with three catches for 120 yards and a score. Kelly Bryant was Clemson's leading rusher with eight carries for 58 yards.

The Tigers forced a three-and-out on Wake’s first possession, and for the seventh time in 11 games scored on their own first drive. It took seven plays, and helped by a Deon Cain pass to Hunter Renfrow that covered 35 yards – ended on a three-yard scoring run by Watson for a 7-0 lead.

The teams traded punts, and Wake Forest took over near midfield with a chance to cut into the lead. On the second play of the drive, however, Ben Boulware launched himself into the backfield and forced a fumble by Darnell Hines that was recovered by Kevin Dodd at the Wake 47-yard line. Two plays later, Watson tossed a 44-yard scoring strike to Peake for a 14-0 lead with 5:36 remaining in the first quarter.

The Tigers forced another Wake punt and took over at their own 24-yard line. Facing a third-and-three at their own 31, Watson rolled right and took the defense with him, then threw back across the field to a wide-open Hopper, who took off down the sideline for a 63-yard gain. Two plays later Watson threw an 11-yard laser to Cain for the score. The extra point was blocked and Clemson led 20-0 with 40 seconds left in the first quarter.

With that reception, Cain became the first Clemson freshman since Sammy Watkins in 2011 to have a touchdown reception in four consecutive games.

The teams traded possessions and punts and then turnovers, but Clemson’s second turnover of day cost them a score. Watson underthrew his receiver deep in Tiger territory, and it was intercepted and returned to the Clemson 11-yard line. Two plays later Kendall Hinton broke tackles and raced eight yards for the score, making it 20-7 Clemson with 5:26 to play in the half.

The Tigers responded and it was another beautiful deep ball from Watson, who shook off the interception in throwing a 47-yard scoring pass to Hopper. The score gave the Tigers a 27-7 lead with 2:05 to play in the half.

Clemson forced another punt and took over at their own 26 with just 31 seconds to play in the half. A personal foul penalty gave the Tigers 15 yards, and Watson drove Clemson methodically down the field, setting up a 40-yard field attempt by Greg Huegel as time expired. The field goal was true, and Clemson led 30-7 at intermission.

The teams muddled through much of the third quarter, but Huegel ended the drought with a 36-yard field goal that put the Tigers up 33-7 with 46 seconds left in the third.

Wake Forest took advantage of a pass interference penalty to score a touchdown that made it 33-13 with just over five minutes to play. Kelly Bryant promptly threw an interception that was returned to the Clemson 31-yard line, and the fans that were left began to boo and get uneasy. However, Clemson's defense forced a turnover after stopping Wake Forest on fourth down.

Clemson vs. Wake Forest Box Score
Comment on this story