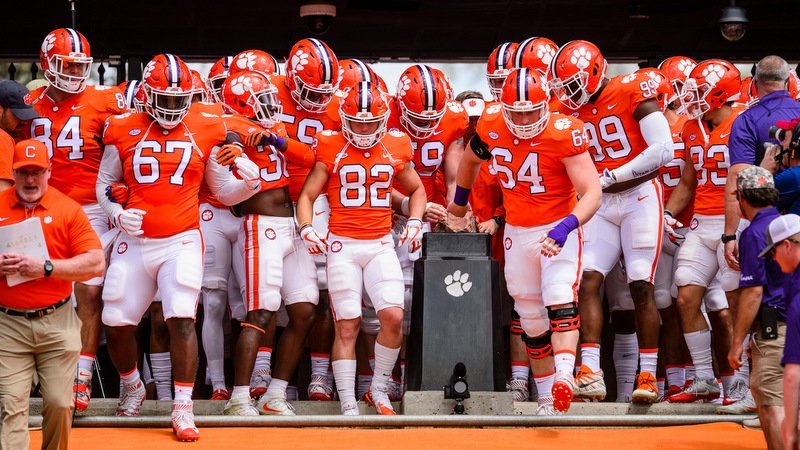 The Orange team prepares to run down the hill Saturday

Clemson made quite an impression on ESPN college football analyst Tom Luginbill Saturday, turning a casual spring game into a two-hour recruiting commercial for one of the nation’s hottest programs.

An ESPN crew was on hand to broadcast the annual Orange and White Game to the nation Saturday, and Luginbill was impressed with the access given to the network, saying that head coach Dabo Swinney “just gets it.”

“I did question him on some of his questionable sack calls. It was unbelievable access. Dabo just gets it,” Luginbill said Monday. “The spring game is a two-hour recruiting commercial, so why not peel back the curtain when everybody isn’t paranoid. I can’t tell you how many times I would be standing next to Jeff Scott and be like, ‘Hey Jeff, what do you have here?’ Being able to give that stuff to the fans was a real treat and is the way a spring game should be done in my opinion.”

Luginbill said that Swinney’s approach to the spring game is refreshing.

“I never thought I’d see this in college football, but when that ball was kicked off in that spring game, every single element in that game was exactly like a game in the fall except the quarterbacks weren’t live<,” he said. “The kicking game was live. The return game was live. Everything was tackle to the ground and you’re just not seeing that in major college football. Right now, you’re looking for people to cancel spring games.

“I think it’s a testament to their depth. I don’t know if you heard Chris Fowler when we were talking to Dabo at the beginning of pregame warmup and we asked him why they were going live with the kicking game because those are obviously dangerous plays. He said the bottom line is, they’re not going to let us go out there with our snapper, our punter and our return guy without the rest of the players on the field when we tee it up in week one.”

Swinney told Luginbill that unlike the NFL and even high school football, college programs aren’t allowed any type of exhibition against a different opponent.

“Dabo said, ‘We don’t have preseason games. We don’t have jamborees. You know what I’d like to do with spring games, if they let us? I’d like to bring Furman in here or bring South Carolina State in here and let our guys compete against a different opponent. It would be good for them and good for us,’” Luginbill said. “He said what we’re doing is we’re basically looking at this as an opportunity to really evaluate, see how our kids have developed. They have two young kids in the return game. One is going to be Derion Kendrick and he’s going to be great, but they needed to see what would happen when the ball was in the air on punts and kickoffs. They’re deep. Can they afford to get a guy injured? Probably at some spots, but not at every spot. I think it’s their temperament at that place. It’s just how they look at things.”