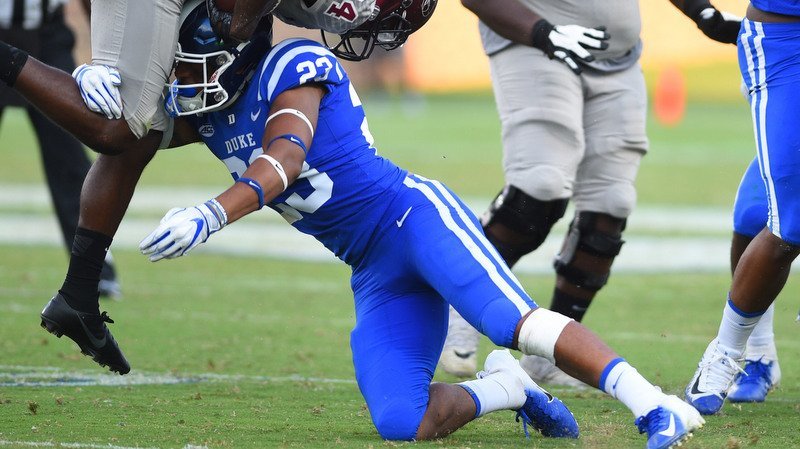 Coming into Death Valley at night against the second-ranked team in college football is plenty of motivation for the Duke Blue Devils, but for defensive back Lummie Young and linebacker Brandon Hill, there’s a little extra chip for this Saturday’s contest.

Young – an Anderson native – and Hill – who received a grayshirt offer from Clemson – are both looking forward to showing the Clemson coaching staff what could’ve been.

For Young, who grew up a Clemson a fan and still remains a fan of the Tigers, he’s looking forward to playing in Death Valley in front of friends and family.

“I’ve got to keep myself from singing along with it,” Young said about Tiger Rag. “A couple of times I had to catch myself. It’s kind of like a surreal moment playing in Death Valley. I grew up loving Clemson. Playing in front of all my family and friends is going to be an awesome experience. I really can’t wait.”

What happened with Young and Clemson?

“I think they wanted a safety that could play a corner position as well. I love those guys," Young said. "They are great people and awesome coaches. I have great respect for them. It kind of puts a little chip on my shoulder. I’m trying to view this as any other game but it’s kind of like a revenge, get-back game. I’m trying to not put too much pressure on myself and just do what I’ve got to do to help the team.”

Hill who hails from Heathwood Hall in Columbia received an offer from Clemson but chose Duke because of the education aspect.

“A great school,” Hill said of Clemson. “I considered them heavily but at the end of the day, I wanted the education and football on top of that.”

For the rest of the Blue Devils, it’s just another game against college football players who get dressed the same way they do.

“This is what we play for,” redshirt junior quarterback Daniel Jones said. “We’re excited to be able to go down to Clemson and play the No. 2 team in the nation. It’s a huge opportunity. That’s the way we’re approaching it.”

However, he also knows he’ll have a big challenge facing Clemson’s defensive line.

“You look at their four down guys and they’re all super talented, capable of rushing the passer and stopping the run,” Jones said of his challenge Saturday. “It starts there. I think as we’ve worked on these past few weeks with a lot of our empty stuff, making quick decisions and getting the ball out is something that I’ll be focused on. The good news is that’s what we’ve kind of done these past few weeks.

“For me to make quicker decisions and not wait is something I’ll continue to work on and work to improve. With how much talent we have on the edge and outside with some of our skill guys who can do those things, I think the empty sets allow us to play to our strengths.”

Defensively, Duke will need to be the more dominant presence in order to pull off the upset according to sophomore defensive end Victor Dimukeje.

“Clemson is the No. 2 team in the nation, as we all know,” Dimukeje said. “They have explosive skill players at running back and receiver and a good and experienced offensive line. We have to attack them and compete for the entire game. They have some of the top players in the nation on their offensive line. Mitch Hyatt is a really good offensive tackle. They do a great job blocking and they also have explosive running backs. We have to be the more physical team Saturday and attack them from start to finish.”