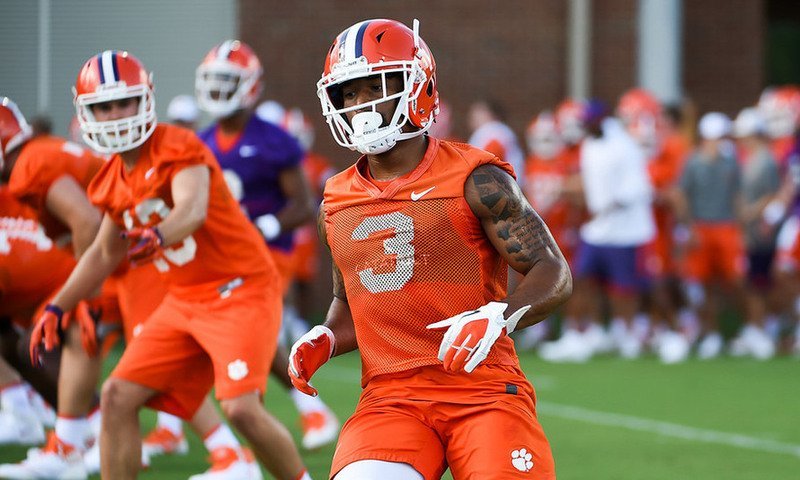 Amari Rodgers knows as well as anybody that no spot is guaranteed at this point in Clemson fall camp.

But early returns - quite literally in one phase of the game - are the sophomore is poised for a breakout season.

“Last year coming in I was a new guy so I had to learn everything. This year now that I have the whole playbook in my mind,” Rodgers said, “I'm confident that I can play faster.”

The Knoxville, Tennessee product came out of the spring No. 1 on the depth chart at the ‘2’ receiver, ahead of junior Cornell Powell and early-enrollee freshman Derion Kendrick. Rodgers says the group’s work ethic is upping the playing level.

“We're all out there competing and pushing each other and making each other better,” he said. “When the time comes a week before the game, we'll all find out where we are. Our wide receiver corps is like a family so I don't think we really think about the competition part.

“We're focused right now on pushing each other and making each other better so when the season comes - whoever is thrown out there will know what to do and is ready to do and will ball out for the team.”

Rodgers is not only expected to step in for former Clemson receiver Ray-Ray McCloud at the ‘2’ WR role - but also on punt returns, as special teams coordinator Danny Pearman said this week that Rodgers is leading the way.

“You've got to be a good decision-maker and I see that in him...The big object is to possess the ball - no matter what you're doing out there,” Pearman said of Rodgers. “And he does that. And he makes good decisions with it...That's a really hard job to in front of 80,000 people and that ball is screaming high and you get out there and you have to catch it. That's one of the basic fundamentals and he does a good job with that.”

Rodgers believes he can break tackles and gets his momentum forward when fielding punts.

“You have to catch it and get what you get. Going (forward),” Rodgers said. “You can't go side-to-side. That's how you cause turnovers too.”

Rodgers says he's worked his way into a key contributor role as a sophomore by a work ethic passed down from his dad, former Tennessee Volunteers QB and current Southern California offensive coordinator Tee Martin.

“He's told me he wanted me to do even more than he did,” Rodgers said. “That's my motivation. Every day I come out here - he won a national championship so I'm trying to win two. He played three years in the NFL, so I want to play at least five. That's my motivation.”

And even a couple time zones away, Martin is making an impact in Rodgers’ life on the field, in addition to off of it.

“When we talk, we talk about how camp's going. I show him my one-on-one videos from practice and he'll just give me tips on what I can fix,” Rodgers said. “I pick his brain on what I can do better. It's never a thing where I feel like I can't ask him anything. He's always still a dad and he's going to give me the best information.”