CLEMSON – If you’re a Clemson football player, and you don’t want to get smacked by defensive tackle Christian Wilkins, don’t score a touchdown.

Wilkins, the junior out of Connecticut who is one of the unquestioned team leaders on the second-ranked Tigers, is easy to spot after a Clemson score. His familiar No. 42 sprints from the Clemson sideline toward the end zone – he’s quicker than you think – and he finds the teammate that scored the touchdown.

As a reward for the score, that player has Wilkins’ huge paw come crashing down on his helmet. Wilkins has even been known to pounce on a teammate or two, and if you think he’s going to change his fun-loving ways, you’re wrong.

"That's really important to me just because I care first of all. I just get really excited when I play the game,” Wilkins said. Tuesday. “I love playing the game and I love every little positive thing that happens for us, I love to get excited about it. Anything that's negative I still try to let everybody know it's alright and have that next play mentality. It's not easy to score touchdowns or anything like that so I definitely want to get excited about that and let my teammates know that I care and that they're doing their job and it means a lot to me."

Of course, Wilkins wants to celebrate with his teammates, but there’s another reason he wants to make it to the end zone – he loves playing on special teams and is on the Tigers’ extra point team. 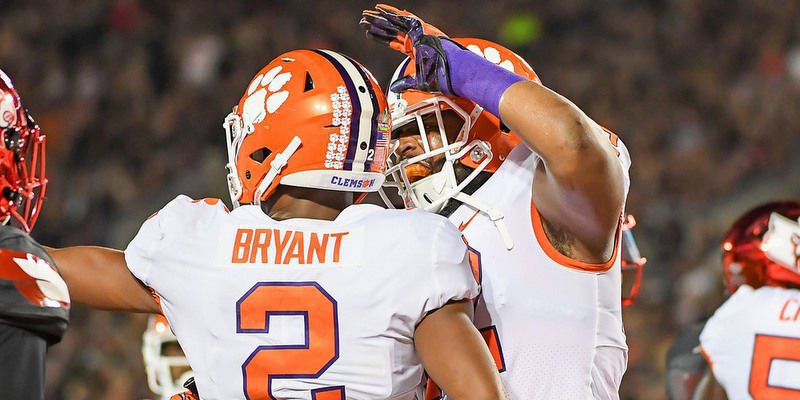 "Special teams is a big part of it. Shout out to the kickoff team because they did a good job of getting down the field,” Wilkins said. “Shout out to Will Spiers because he did a good job of just giving those things a ride. You've got to play complementary football. That's what makes good teams really good but it doesn't matter if the offense might not have a good drive but if the special teams can but the defense in a good spot it's easier to play off of that. Same with the defense, if the defense is able to get off the field then it gives the offense good field position. You've got to play complementary football which is always good because it makes you better as a team."

Wilkins’ teammates appreciate his fun-loving nature, but wide receiver Hunter Renfrow is especially wary of getting hurt and has found a new way to celebrate with Wilkins – the kids’ game rock-paper-scissors.

"He hits you hard. You've got to be aware of the concussions when he hits you on the head,” Renfrow said with a laugh. “I think we started in the ACC championship last year as a joke that we do rock, paper, scissors and I'm up 2-0 on him. I got him in the ACC championship and after the first touchdown in the first national championship. In the second national championship, we didn't get the chance to do it but I'm looking forward to doing it for the rest of the year. It was a nice compromise. I was getting tired of him smacking me on the head and he can get his excitement out that way."

For his part, Wilkins doesn’t think about the momentary pain his celebrations might bring to his teammates.

"That's something you'll have to ask my teammates. I don't ever think it's too much,” Wilkins said. “There's been a couple close concussions and things like that with me smacking guys on the helmet or something and guys saw stars or something but I'm just gonna keep doing it. Don't score if you don't want me to get too excited about it."