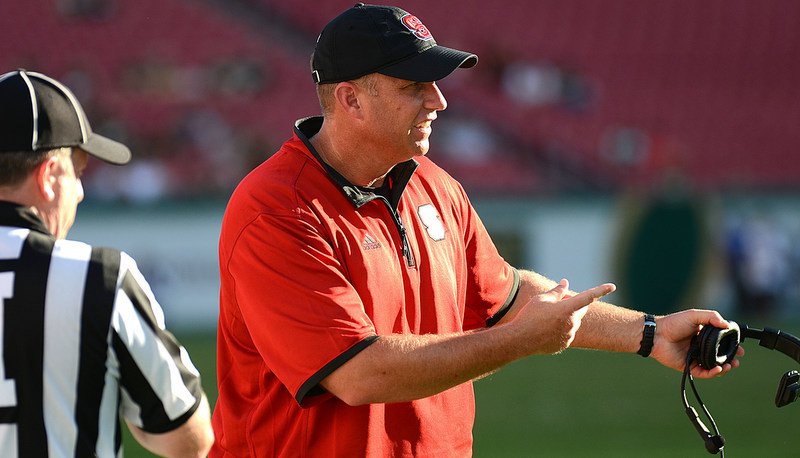 Clemson and N.C. State are used to playing high scoring, back-and-forth games and Wolfpack head coach Dave Doeren will use that to motivate his team as they come to Death Valley Saturday afternoon.

Last year, the Tigers and Pack went back and forth until late in the third quarter when Clemson finally pulled away for a 56-41 win on Halloween. On State’s last trip to Death Valley they were shut out 41-0.

Doeren, however, will focus on last season’s game and tell his team that if they can put together a complete game effort, they can leave Memorial Stadium with a win and control of the Atlantic Division.

“I think for our guys, some of them have played against Clemson, Florida State and Louisville in games where we’ve been in a one-possession game or even had leads in the games and didn’t find a way to win,” Doeren said earlier this week during his press conference. “That’s where it gives you the confidence to just keep playing and believing in what you’re doing and that you can win those kind of games. Last year we were in a back-and-forth game with Clemson early and didn’t maintain that for four quarters, so we need to try and make it a four-quarter game where we have that kind of ability to finish it off in the fourth quarter.”

To emerge victorious would mean stumping Clemson’s defense, a unit Doeren said is better than the 2015 version.

“Well I think we’re better than we’ve been, I also think they’re better than they’ve been. I think this is the best defense we’ve seen from Clemson,” Doeren said. “They’re really good on defense and have always been on offense. Not that their defense was bad last year but they’re doing some really good things on defense right now. Last year they gave up a lot of big plays and you’re not seeing that on film right now. It’s going to be a challenge but every time you go against a top-three team it’s always going to be a measuring stake game as far as where we are compared to where we’ve been. I think the biggest thing October 11, 2016 our guys are trying to do is to be better than we were a week ago and know that if we are we’ll have a chance to win this football game.”

Defensively, N.C. State is giving up just over 17 points and 279 yards per game –91 yards on the ground and 188 yards passing – but Doeren knows his squad will face its toughest challenge to date.

“Now we move forward to a great challenge with Clemson on the road in a tremendous environment,” he said. “They’re a very good football team – everyone knows that. They’re very balanced and have great personnel on both sides of the ball. Offensively they’re aggressive and take shots down the field. I think their tailback is a really good runner, he runs hard and quick. Deshaun Watson was the most accurate thrower in college football a year ago and has great targets that will go get the ball for him. They’ve only given up five sacks and have four receivers averaging over 10 yards a catch. The challenge there for our defense is preventing big plays, tackling well and spacing the leveraging. We have to also create takeaways for our offense because in an environment like that getting a short field versus a long field is a huge deal.”

Outside of the X’s and O’s Doeren knows his offense will have to contend with a raucous Death Valley crowd that forced five procedure penalties against Louisville just two weeks ago.

“Another aspect is handling the crowd noise this weekend. If you watched the Louisville game it affected them in the first quarter,” he said. “We know they’re a fast starting team, averaging 69 points to their opponents’ six in the first quarter. So we have to be able to handle the environment and get off to a good start. It will be a challenge but that will be our mantra all week. We have to do a really good job of controlling what we can, focusing on the little details of each call and putting ourselves in a position to make it a four-quarter game and once again find a way to win. Once again we’re really excited about the opportunity to play down there and have great respect for what Coach Swinney and his players have done.”