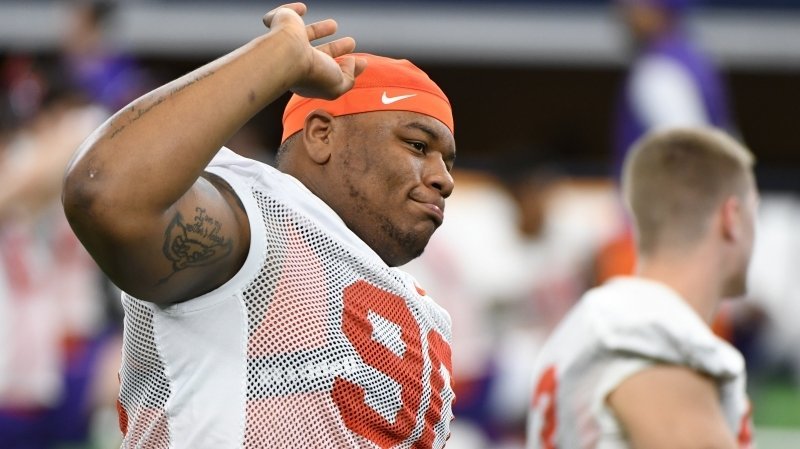 The NCAA informed Clemson on Thursday that the "B" samples produced the same result for defensive tackle Dexter Lawrence, offensive lineman Zach Giella, and tight end Braden Galloway and the trio will miss Saturday's Cotton Bowl College Football Playoff semifinal between the second-ranked Tigers and No. 3 Notre Dame.

The “B” test came after the “A” sample showed a trace amount of the banned substance ostarine. Clemson asked for another test to be run, but it was off the initial urine sample and came back with the same result, according to head coach Dabo Swinney.

Swinney said Lawrence was obviously disappointed in the result.

“Yeah. He was, obviously, disappointed. All three of those guys were disappointed but not surprised. I mean, it's not like it was a different test. It was the same urine. Sorry about that, but that's what it was. (Laughter.) Different tube, same urine,” Swinney said during Friday’s joint head coaches press conference.

“So the test was the same. I don't think anybody was real surprised by that. So disappointed. But we've prepared for that the whole way, or at least since Monday. And our guys are ready to go.”

Swinney said it will be next man up for the Tigers.

“But Albert Huggins is a great football player. And you've just got to treat it like an injury,” he said. “The next guy has got to go play. They're not going to cancel the game. Nobody is going to sit around and have a pity party or feel sorry for you. You've got to go play. And we're fortunate, very fortunate, that we've got a guy like Albert that in our eyes is a co-starter for us that can step in.

“But, I mean, I don't want to lessen the impact of Dexter. Obviously, he's a phenomenal player. And we're going to miss him. But it's an opportunity for Albert and Nyles [Pinckney] and Jordan [Williams]. Those guys have played all year long. They have a ton of experience. They hurt for their teammate. But you best believe they're excited for a little more opportunity for themselves.”

The next step in the process is in the hands of Athletic Director Dan Radakovich and the Clemson legal team.

“Well, Dan Radakovich is kind of running with that with our legal team. They have representation,” Swinney said. “And there is a process in place. And, obviously, the timing of it is not very good for this game. But if we were fortunate to be able to win the game, then they'll do everything they can to see if there's any opportunity for next week, if that were possible. So that's really it, you know.

“And there's a longer runway, obviously, for the fall because there are other consequences other than just losing this opportunity. So they'll handle that and deal with that and that's where it is.”