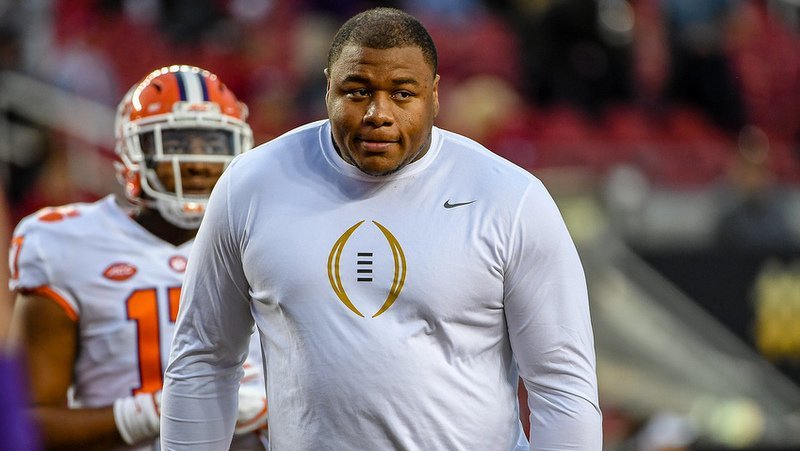 Dexter Lawrence loves the game of football, and he now realizes how quickly the game he loves can be whisked away. It’s something that is never far from his mind.

The former Clemson defensive tackle and two teammates tested positive for ostarine before the College Football Playoff and missed the Tigers’ win over Notre Dame in the semifinal and the win over Alabama in the National Championship.

Lawrence spoke to the media at the NFL Combine in Indianapolis Saturday and said the situation was a lesson in how to handle adversity.

"I love this game," Lawrence said. "And just to see something like that make it go away so quickly, something I didn't intentionally do. The last two games of my career -- the most important games -- happen like that was very hard for me to deal with.

"I just kept praying about it and tried to stay strong in my faith and view it as a positive. You know, I feel like that happening helped show my character and show who I really am. It showed how I handle adversity."

Lawrence said he had never heard of ostarine until he heard that he was suspended.

"Unfortunately, I tested positive for a drug that I don't know how to pronounce," Lawrence said. "I'm naturally this size, this big. Been this way all my life. There's no reason for me to do anything selfish like that. And it's unfortunate that it happened, and all I can do is be positive about it.

"Every time I take a drug test, I'm going to be skeptical. Every time I pee in a cup now, I'm just thinking like, 'OK, let me pray.' Because something stupid like that I know is capable of happening."

He then said that all of the NFL teams he has spoken to have asked about the suspension.

"But you can't complain about that," Lawrence said. "That's what you came here for, to show yourself and who you are. They ask what happened, what's the deal. I think they know that I'm not the type of guy to do anything like that, so they just wanted to catch up on the facts. That's all."

He said in order to find closure, he wants to know how the ostarine got into his system.