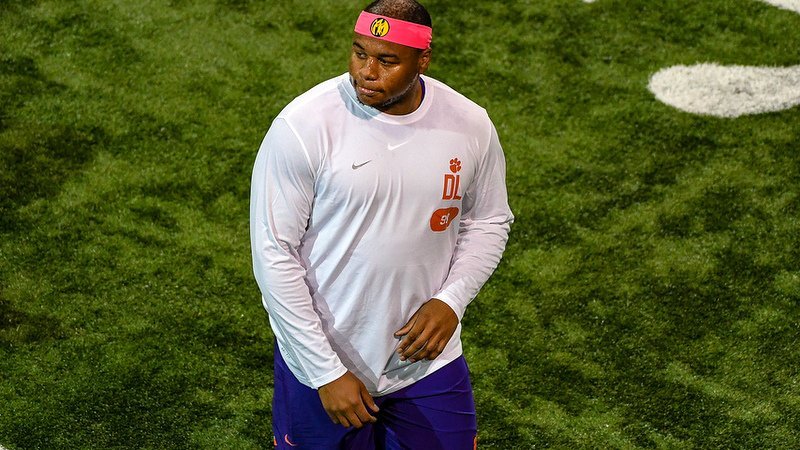 CLEMSON – One former Clemson player who watched Clemson’s Pro Day Thursday was asked which player caught his eye and has the best chance to succeed in the NFL. He looked at the sky for a moment and then let his thoughts be known.

“Dexter Lawrence,” he said. “He is just different. You don’t see that combination of size and speed very often.”

Lawrence worked out with his former mates on the defensive line for NFL coaches, scouts, and GMs Thursday, and decided that competing against his friends would bring out his best effort.

“We competed here; it’s nothing different. We just pushed each other every day,” Lawrence said. “We all want to be the greatest – that’s what we compete for every day on the field and in the classroom. It’s just something naturally that happens, we’re all competitive people, and we want to be the best.”

Lawrence said the return of Christian Wilkins, Clelin Ferrell, and Austin Bryant also helped him prepare for the 2018 season.

“That relieved a lot of stress for me. We have a lot of young guys on the team, and I couldn’t be in the defensive ends room and in the tackles room at the same time,” he said. “So, it was kind of just them holding the defensive ends room and Christian and I holding the tackles down. We were just building that bond with them. We don’t want it to separate when we leave because we’re in two different rooms, we want it to stay together and keep that competitive nature going.”

Lawrence said he is learning all about how the NFL works and how to put his best foot forward.

“I would say just the film study – going over film with different teams – and just the couple of dinners that I have been to is different,” Lawrence said. I”t’s kind of like a business, but it’s a business that I want to be a part of. I’m really active with it – just talking and being myself. I’m enjoying it right now.

“Pretty much you have just to be yourself. Don’t be who you’re not – if they like who you are, then they like you if they don’t then they don’t. Being honest is another key because they know everything already. There’s no point in sitting there any lying to them and to yourself.”

Where does he think he fits best at the next level?

One question he’s had to answer concerns his suspension for the College Football Playoff after he tested positive for trace amounts of ostarine, and he said that while he knows he has to answer questions, it doesn’t mean he has to like it.

“I know that I have to address it, you can’t hide from it,” Lawrence said. “It’s something that I just have to deal with right now. I don’t like talking about it because it’s dumb and I didn’t do anything.”

“It’s very frustrating for me. Something chemically in my body could have happened that I don’t know of. It’s just kind of annoying, and I’m getting tired of it really – it’s stupid.”