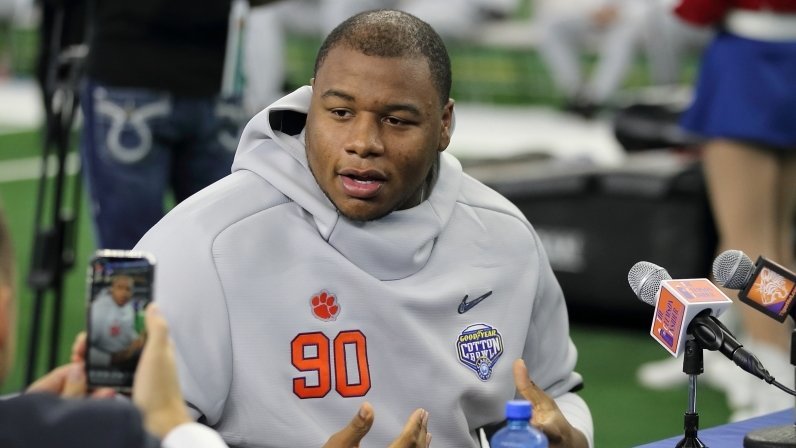 Clemson’s junior defensive tackle likely won’t play in Saturday’s Cotton Bowl against Notre Dame after testing positive for ostarine, a substance banned by the NCAA. The team is awaiting the results of a B sample that might clear Lawrence and offensive lineman Zach Giella and tight end Braden Galloway.

Whatever happens, Lawrence is doing what he can do to help his teammates.

“I know that I have no control on what the B sample result will be. I’m just here to support my teammates and try to be the leader that I’ve been all year,” Lawrence said during Media Day at AT&T Stadium Thursday. “Just helping the mentality of the whole team just be better and bring us closer together and things like that.”

Lawrence was back home in North Carolina last week when Clemson head coach Dabo Swinney called to ask if he had knowingly taken an illegal substance.

“I was looking at my phone like, ‘Are you crazy? What’s wrong with you for asking something like that.’ The next thing you know he tells me I tested positive for something I’ve never heard of or know where to get it,” Lawrence said. “I can say I’m not the type of guy to do a selfish act like that. I have too much pride. I love this team and my family too much to even think about putting a substance like that in my body.

“I don’t know where it came from, how it got there. I was raised differently. If I did do it I’d own up to it, but all I can say is I honestly don’t know what happened or how it got in. It’s just there. There’s nothing I can really do about it.”

Lawrence and the Clemson coaching staff are waiting on official word on whether Lawrence will be able to play Saturday. A final decision is expected once results from a second “B sample” urine test are released. Swinney said the team expects the results at some point on Thursday, noting that the lab was in California and a few hours behind.

In the meantime, Lawrence is racking his brain trying to figure out why the ostarine is in his system.

“I have a guy who’s guiding me, just giving me some knowledge about everything,” Lawrence said. “I stick to a strict routine. Nothing has changed. I’m confused. I’m mind boggled. I just honestly don’t know,” he said. “Just doing research, just trying to find out what I’ve done differently or what I’ve drank differently or something like that.”

Lawrence said he was offered the choice of whether to attend Media Day and answer questions, and he elected to show up and face the media.

“I just wanted to come because I consider myself a leader and I just wanted the guys to know I’ve got their back just like they’ve got mine,” Lawrence said. "Right now I’m at peace.