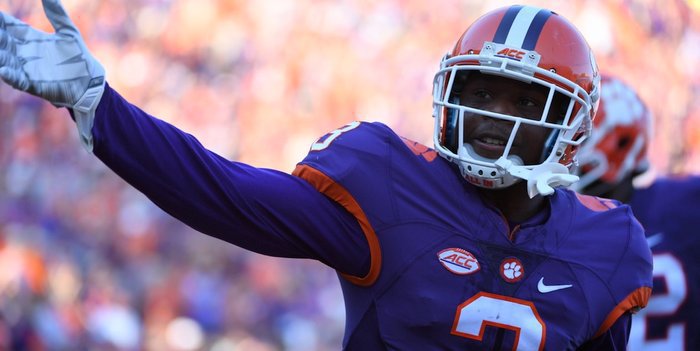 CLEMSON – Deshaun Watson’s path to early graduation has been well-chronicled, but his roommate is taking the same path and no one is talking about it.

That needs to change.

Clemson’s standout junior quarterback is on track to graduate in December, and Watson has taken as many as 19 credit hours during a semester and doubled up on classes during the summer so he can graduate early.

Wide receiver Artavis Scott is on the same track and will graduate with a degree in communications studies in June, and he told TigerNet Monday that his semester hours have varied over the past two-and-a-half years.

Scott rooms with Watson, and like Watson his plans to graduate early began after the success he had as a freshman.

Scott said getting his degree will make his January decision – he’s eligible to declare for the NFL Draft – a little easier. If he decides to enter the draft, he knows he will already have his degree in hand. If he decides to come back, he can work on getting a master's while improving his draft stock.

“It's huge. It takes a lot of weight off of your shoulders,” he said. “You don't have to talk about it with your parents or whoever you discuss things with because you already have it done. That's definitely something to be proud about. If I decide to come back to school, I can work on my master's or something. It's huge to have that situation complete.”

To date, he doesn’t know the direction he’ll take. Instead, he’s concentrating on making sure he graduates.

“No. I'm going to do what I've got to do to finish this season off strong and I'll think about that stuff later,” Scott said. “I'll be a first from my mom's kids to get a degree, that's huge. We talked about that even before I came here to college. That's one of the biggest things I definitely needed to do and I had the opportunity to do it.”

Is the offense hitting its stride?

On Deshaun getting better

“It goes back to what we do in practice. We do a lot of one-on-ones and we've got a lot of great players on our side, so just getting that done against those teams is a great challenge for us. We'll just use our skill set and what we work on in practice and take it to the game.”

On is he’s been frustrated with his lack of numbers