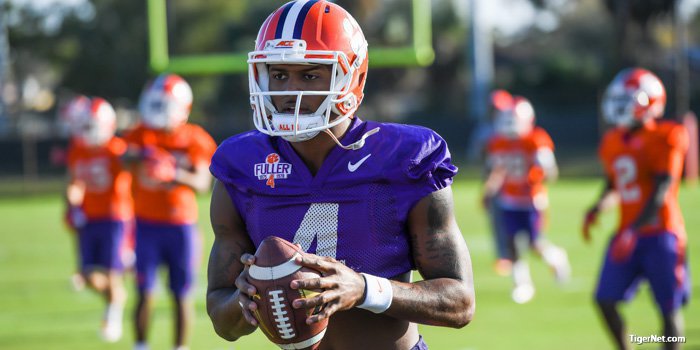 Watson checks off the right boxes for NFL quarterbacks

Deshaun Watson’s NFL status is a hot topic these days.

And really, it shouldn’t be much of a discussion.

Any NFL teams that pass on Clemson’s greatest ever player are going to regret it for a long time.

There are a lot of doubters out there about Watson’s chances as an NFL quarterback. There are the usual worries about a quarterback’s size (he’s listed at 6-foot-3 and 215 pounds on the Clemson athletics website, but college sizes are typically off a bit). There are people who doubt him as a pocket passer even though he has thrown for more than 10,000 yards in less than three full seasons as a starter.

There are critics of his decision-making and ability to read defenses because, after all, he led the country in interceptions the past two seasons.

All of those questions are legitimate, but they’re also missing the point.

Watson checks off all those boxes. 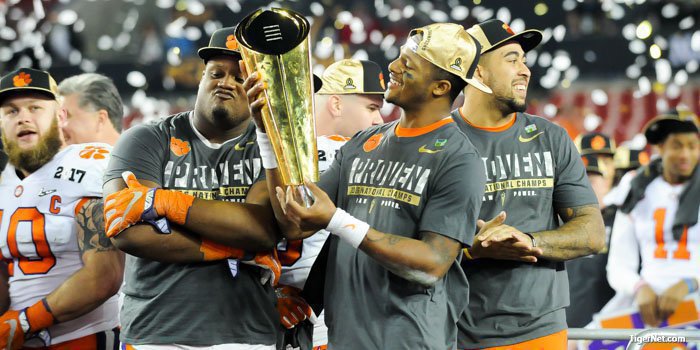 Watson checks off the right boxes for NFL quarterbacks "

Watson lifted the Clemson program to new heights. Sure, there were other key players who helped that cause, but it all started with the dynamic quarterback from Gainesville, Georgia. Watson is smart. He’s a hard worker. He can certainly throw the football. And he knows what it means to lead and lift the players surrounding him.

In short, he’s a winner, and there’s not enough emphasis put on that by NFL scouts and coaches, and that’s one of the big reasons so many teams have to fire their coaches each year.

Watson isn’t perfect. He has work to do, for sure. Yes, he needs to be more accurate and more consistent. But what college quarterback doesn’t?

Critics keep saying he’s not the typical NFL quarterback. But what does that mean exactly?

Sure, they are all pocket passers first, with the exception maybe of Wilson, but is there anything typical about them? Peyton Manning and Brady are two of the all-time greats, but they aren’t really known for their arm strength. Eli Manning is as inconsistent as they come, while Roethlisberger is known for his grit and ability to make plays out of nothing. Flacco and Rodgers are nothing alike, and Brees and Wilson certainly destroy the size myth.

But what do they have in common? They’re workers. They’re smart. They take the game and their responsibilities seriously. And really, they’re all terrific leaders.

So Watson likely won’t be the first player taken in the draft, and maybe even not the first quarterback. But five or 10 years from now, the teams that skip over him for other players (especially other quarterbacks) are going to be wishing they could make that pick over again.