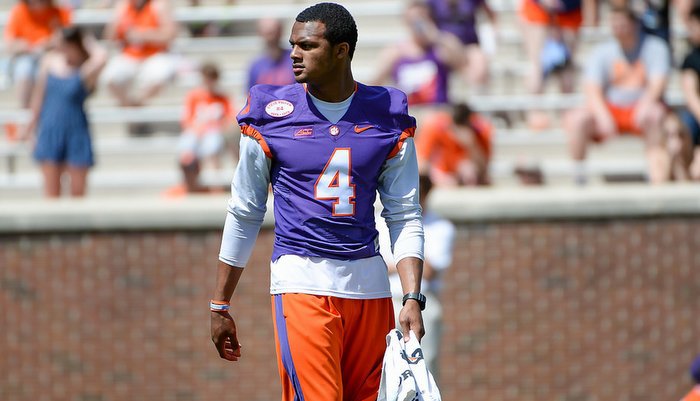 CLEMSON – Clemson’s abundance of offensive talent was on full display Saturday afternoon in Death Valley, a strong showing despite the absence of their field general in quarterback Deshaun Watson

How special can the Tigers be once Watson returns from his torn ACL? The Gainesville native and rising sophomore thinks the 2015 Tigers have the chance to be special and can – in his words – go all the way.

Watson missed all of spring practice after tearing his ACL late last season, but that doesn’t mean he was out of sight Saturday as the Tigers played the annual Orange & White Game in Death Valley. However, he took every step that Clemson head coach Dabo Swinney

Dabo Swinney
Head Coach
View Full Profile made during Saturday’s game – standing behind the offense for every play - something he said was needed to stay mentally sharp and ready to get back under center when summer workouts begin in June.

“It's something that I did all spring. It's something that me and Coach Swinney decided that since I can't be out there physically I'm going to be there mentally to take every rep that every other quarterback takes to make sure that I'm staying prepared,” Watson told the media following the spring game. “I was somewhat coaching them [the younger guys] when they asked questions. I didn't want to say too much. I just let them go out there and play their game and have fun. I talked to them a little bit and cheered them on.”

Now that spring football is over, the football players can focus on academics before hitting the weight room for summer workouts and Watson said it’s during these next few weeks that he will sit down and formulate a plan as to how the summer needs to go.

“These next few weeks are going to be very busy for all of the players,” Watson said. “We've got finals and then we're going home so we'll get together next week and talk about the summer. Once we get back for summer school, we'll go from there.”

Watson said that he hopes to be cleared to begin working out with his teammates sometime during May, but he won’t rush to get back.

"Hopefully this summer. I take it day by day. I'll just keep moving forward,” he said. “That’s the plan [to come back around May]. Whatever [head athletic trainer] Danny Poole wants me to do, I'll go out there and try to do it. I'll listen to my body. If I can go then I will go. I'm not really positive what I’ll be able to do. Over these next two weeks we're going to figure out what we can do this summer. It's whatever Danny needs me to do."

Once he is cleared for summer workouts, Watson said he plans to get right to work with all of his talented teammates that he’s been watching from a distance since being sidelined with the injury last November.

“I have talent all around me. My job is to get them the ball and let them do the rest. I'm very excited,” he said. “If we come together, we can be very special. That's the goal. That's what we're going to focus on this summer. We're going to get together next week and talk about the summer."

If Watson and the rest of the offense have a productive summer, he said he believes the Clemson Tigers will be destined for the College Football Playoff and a national championship.

"We can go all the way, I think,” he said. “Everyone is positive. We want to take that next step. Everybody is excited and very humble. They've got a good work ethic, we're humble and we're going to do our best."