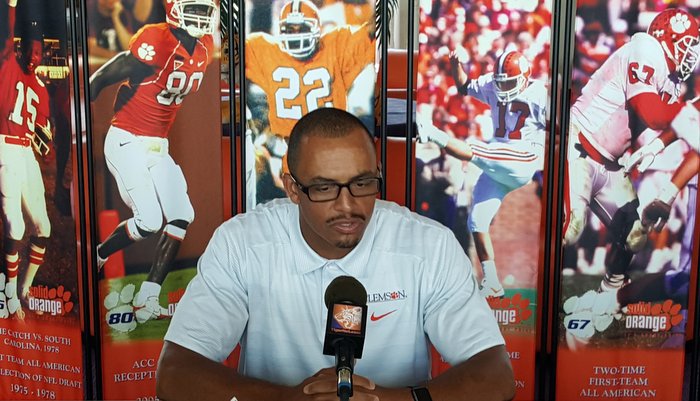 Tony Elliott talks to the media Monday in the WestZone

The offensive line lost four starters off the 2014 unit and are looking at starting a true freshman at left tackle, but Elliott told the media Tuesday morning that the influx of young talent has the line ahead of expectations.

“It's a lot of improvement. With the infusion of the young talent, they brought a different mindset,” Elliott said during a Monday press conference in the WestZone. “You're talking about Mitch Hyatt

Zach Giella
Fr. Offensive Line
#77 6-5, 275
Augusta, GA
View Full Profile coming in. Those guys have really upped the preparation and the culture in that room - the nastiness and the toughness that you expect out of the offensive line. It's important to them. Robbie has done really, really god job of giving those guys an opportunity to go compete and really change the environment in that room.”

“In terms of the running game, just the consistency of identifying where we're trying to go and understanding the scheme overall of who we're trying to get blocked,” Elliott said. “Coach Venables and the defense do a great job of moving personnel and changing personnel, stemming and moving. I thought they did a really good job of knowing what we're trying to get accomplished. Technically, Coach (Robbie) Caldwell has done a great job with those guys. Obviously, the big question is Mitch Hyatt, who I think has really grown up over the course of camp. He's had the best defensive end in the country to block day in and day out and Shaq hasn't taken any days off on him. Overall, the consistency of understanding the schemes, technically they've all gotten better, and we feel pretty good about Mitch at left tackle.”

Not only has Hyatt cemented himself as the starter, Elliott said he feels good about the other tackles should the true freshman go down with an injury.

Taylor Hearn
RS Fr. Offensive Line
#51 6-4, 325
Williston, SC
View Full Profile really, really impressed us with his ability to play tackle. So we feel good tackle situation if something were to happen to Joe or Mitch.”

The second question of Watson’s health is something Elliott said is rarely talked about, as the sophomore signal caller is ready to “go get it.”

The possibility of redshirting Adam Choice

“Obviously it is a situation where you’ve got to stay healthy. We will travel five backs so we will have five guys. I think it will be a situation if you lost one or two of those guys to a significant amount of time then you would have to get him ready to play. Where I think Adam is I think physically he is ready, but I think mentally he is working himself to get there consistently on a daily basis. I think with the ball he is fine. It's just without the ball, the confidence in that knee to step in there and pass protect and just generating power from that standpoint. He is just not quite as confident there.”

“Jay has really, really, come on. He came to camp and hadn't played in a while, but he got himself in shape. He is moving well. He has got a new look on life. Got a new attitude. He's a pleasure to be around. He and I have a little bit of fun relationship going. For some reason he has kind of clinged to me since he came back, but it is good. It's good to see him at a place in his life where he is, and now he is able to get back to doing what he loves, which is play football.”

“He is a guy that when we came into camp we didn't think he was going to be a guy that was going to play on the edge very well. He was given an opportunity and he has impressed everybody within the program. So when you have that ability to play guys at different spots it helps you from a depth standpoint on that second team.”

“He is a guy with where we are at we feel like we could probably get a redshirt year for him, but that could change, just depending on how we stay healthy up front.”

“First and foremost, it's his athletic ability. You see what he can do with the ball in his hands in space. He's very capable as a runner, but the things people haven't seen are his development as a passer, the ability to command and control the offense and make the right decisions, to be able to make the right protection calls and technically he's gotten better through his work with Coach Streeter.”

“It's going be determined once we get closer to the game, but right now C.J. Davidson