CLEMSON - A visitor to Clemson’s Tuesday practice in Jervey Meadows shook his head as he walked to his car, telling anyone and everyone that Deon Cain is the real deal.

The junior receiver out of Florida has, by all accounts, taken another step forward during fall camp and appears ready to step into the void left at the “9-man” receiver position played by Mike Williams.

Watch any Clemson game last season, and it’s easy to spot Williams, who couldn’t be stopped at Auburn, gave free rides in a one-man destruction of South Carolina and came up big in the College Football Playoff.

Cain is ready to step into that role and said he’s changed his approach from his first two seasons on campus.

"Pretty much, I just want to get better from last year. Be more of a physical guy at the line of scrimmage and run crisp routes and just lead my teammates by example by how I play. If I'm playing good I know they'll follow," Cain told the media following Tuesday's practice. "Camp was great, I learned a lot through camp in just putting all that work together."

He is now ready to be that go-to guy after a summer in which he learned a little bit about himself.

"For sure. I try to go in practice every day and try to be way more consistent and work on my timing with my quarterbacks and I feel great going into the season and that first game,” he said. “More of being a finisher every play. Throughout camp I really had to figure out myself and 'Am I going to give great effort every play,' and just giving it all 100-percent every play." 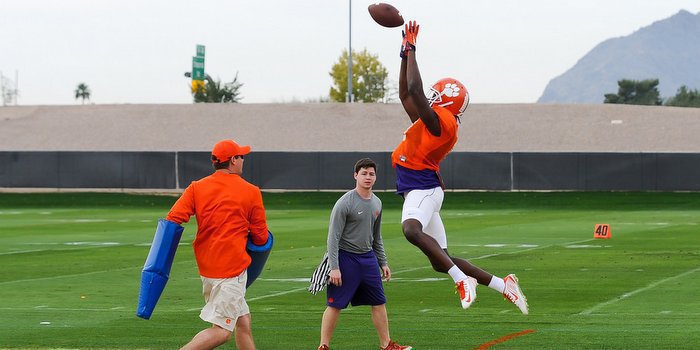 Cain has even worked on the 50-50 jump balls that Williams mastered into an art form, saying he worked on them every day.

"A majority of the time, but that's really just instincts at the point of attack but at the end of the day this is what we work on consistently and what we're known for and I always want to finish every play with that kind of opportunity and I'm always going to try and finish it,” he said.

Clemson named Kelly Bryant as the starter at quarterback, and Cain said he’s seen a different side to Bryant in recent months.

"Like I said, he's a more focused guy now,” Cain said. “He's getting more consistent and you can see the way he's leading on the field and in the film room. Staying consistent and his production the last couple days have really been showing he can be the guy. I'm really excited about it. Everybody has got a lot of confidence in him, he's looking great out here every day. Just staying consistent and keep on working hard. I know he comes to practice every day confident and I see him, it shows.”