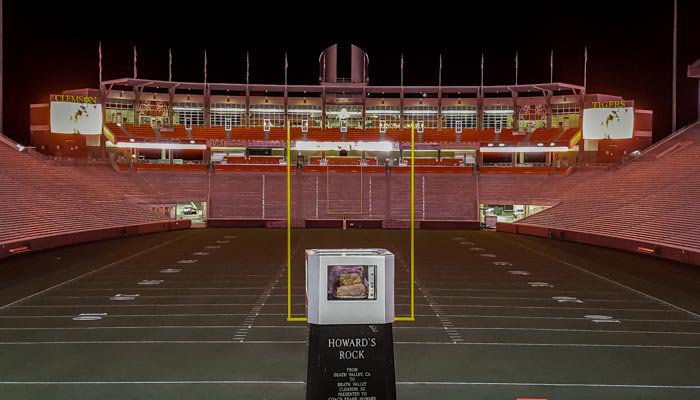 Death Valley sits and waits for the coming of autumn.

I had to run a late errand on campus last week, picking up my wife, Nikki, at Martin Hall, and we made an early dusk stop outside of the gate that houses Howard’s Rock. Why? Even though we both are on campus every day and see the stadium all the time?

The gates were closed, but that didn’t stop a multitude of people from driving by and stopping to take pictures or simply gaze through the gates and think about the future. Others walked from different parts of campus, and they stand, and they talked in whispered tones and point. For most of those people, the stadium itself holds some kind of memory – a certain game, a certain play, a certain player or maybe even a season.

The field itself isn’t in great shape. The athletic department will be installing new grass soon, and the old grass looks rust-colored, and the painted logos are faded. The last of the youth camps will take place this week, and then the process of getting the stadium back into working shape will begin.

Nikki and I walked away from the gates, and again it struck me how different the campus can be when football season arrives. I drive onto Perimeter Road from the backside of the campus – near the golf course – three or four times a week almost every week of the year. I always love the drive…there is always something to see, including Nikki and I finding an alligator snapping turtle the other day….but it’s different on game day.

On game day, it’s electric. It’s packed. Cars are decorated, and they flow in towards the Valley, tailgates are set up in every nook and corner, and fans start streaming towards the gates hours before kickoff. 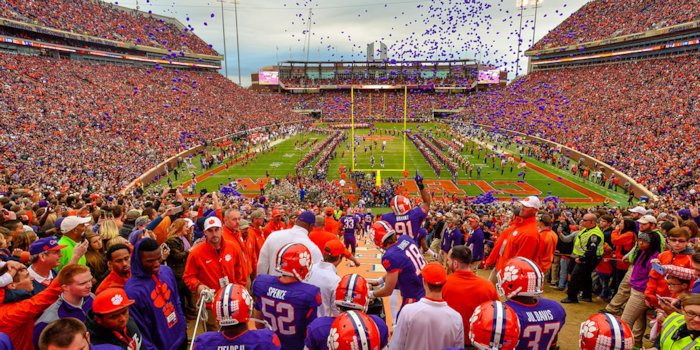 The day that Nikki and I were there, it was hot. Camp last week was hot. To many people, the beginning of a long, hot summer is here and the thought of football season or games is merely a footnote as we deal with vacations, kids out of school and trying to stay cool in the soaring temps.

For just a moment, however, I was swept back in time. The video boards in the stadium are almost always on, and as they flashed with some announcement I was taken back to last season’s Notre Dame game and to the Georgia game in 2013. For just a brief second, I felt the rain, and I heard the cheers. I closed my eyes and saw leaves awash in fall colors and dreamt of cooler weather and the kind of day in which you start out in a sweatshirt or light jacket and wind up in short sleeves as the fall sun warms a sun-splashed Clemson afternoon.

For now, though, the stadium sits quietly. Instead of 85,000 frenzied and orange-clad fans, a mere few walk by and revel in their own quiet thoughts.

But something is building. The remainder of the 2016 recruiting class will be on campus later this week, summer workouts will begin, and football will be right around the corner. Interviews will start in about a month. Until then, however, we wait patiently as expectations and excitement builds. There will be a road game at one of the nation’s best venues, but Clemson fans will return to Death Valley the second week of September as it's meant to be and in all of its glory.

Be patient. Death Valley won’t be silent much longer. The storm is coming.