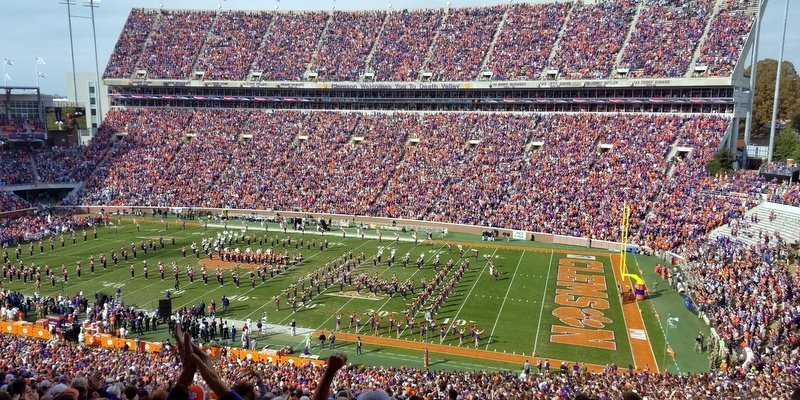 Another home season, come and gone.

It’s hard to believe that the home portion of the 2017 schedule is complete. Wasn’t it just yesterday that we were covering the start of fall camp? It seems like it gets shorter and shorter every year. Head coach Dabo Swinney said it best a few weeks ago when he told us, “The days get longer but the years get shorter.”

When last season ended, I have to admit I was a little burned out. Two trips to the College Football Playoff, ACC Championship Games, countless interview sessions and all the travel take a toll. It seemed like spring practice started mere days later, and when mid-April rolled around I was done. I needed a break.

Fast forward to the end of May. The ACC baseball championship was held in Louisville, and on the off day Nikki and I headed to Chicago for a Cubs game. On our way out of Chicago, we saw a sign for South Bend, Ind., shrugged our shoulders and headed for Notre Dame.

We toured the campus, walked around the stadium and took in as much as we could before darkness started to settle in on a cool evening. We got back in the car (Nikki was driving) to head back to Louisville, and as the sun descended on the farms and fields of Indiana, thoughts of college football began to make their way into my consciousness.

Within minutes, I was scrolling through YouTube and pulling up college football fight songs. We stopped at a small intersection to get gas and a drink, and as a big combine rumbled down the road we began to discuss the upcoming season. For the first time since January, I was ready to get the season started. Back in the car, we went over every position on the team and began to count down the days until the ACC Kickoff and head coach Dabo Swinney’s media golf outing.

Last Friday night we drove by the stadium just so we could see it bathed in light. We walked outside the gate at the top of the hill and looked up at our usual seats in the press box. There was a crowd there – there always is before a game – but many of the people simply milled around the gates and across the road, not wanting to leave.

The next day, I dropped Nikki and my boss at the press box, parked the car and made the walk to the stadium. Instead of walking up the hill, I took a detour through Shotgun Alley. I reveled in the cool air, the crunch of leaves under my feet and jealously looked on as people threw footballs, ate and enjoyed their last big tailgating event of the year (at least in Clemson).

I am sure there are many of you rip the tickets off your ticket book or tear off that week’s parking pass and realize that the season passes quickly. You can’t believe when game three and then four and then five comes and goes.

It was a big recruiting weekend, so we had to be on the field a little early. I tried to focus on the recruits, but it was difficult. I kept looking around the stadium and listening to the fans, and a part of me felt empty. Was this really it? Another home season in the books? I won’t roam the sidelines again until next September?

My dour outlook changed at halftime. Instead of diving into my usual halftime routine of a cheeseburger, I stayed in my seat for Clemson’s Military Appreciation tribute. The band playing Taps? Gave me chills? Seeing all of the men and women in uniform? Made me smile. Seeing the soldiers lay out the Soldier’s Cross and the 21-gun salute? That brought tears to my eyes.

As you go about your Thanksgiving and watch football with your family and friends, take a moment to remember those who have sacrificed it all so we can have the chance to have days like today. Sure, I was a little sad that the home portion of the schedule is over. Monday, I took a trip over to the Scroll of Honor and said a silent thanks to those whose names are inscribed there.

As I looked across the street and into Memorial Stadium, the sadness left me. Clemson, and what it stands for, is about more than football. As the November breeze stirred the American flag, the chain striking the pole, I realized how lucky we all are to call this place home.

Happy Thanksgiving to all of you from us here at TigerNet.