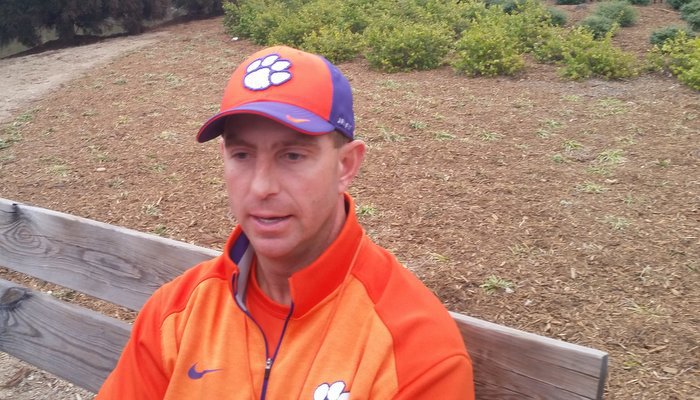 CLEMSON – The Clemson football team held its next-to-last practice before spring break Monday afternoon, and it was evident in head coach Dabo Swinney

Dabo Swinney
Head Coach
View Full Profile ’s tone and demeanor that he likes what his team accomplished through the first week.

The Tigers held their first real scrimmage situation Monday afternoon, and Swinney said the balance of this team is different than what he’s had in the past.

“Day five. We got good work Friday and Saturday and today was our first half scrimmage situation,” Swinney told reporters after practice. “It was controlled situations. We had a first-and-10, winner loser, plus or minus four battle. We had some second down play third down. We had some four-down territory with two downs to get it. We had third down. We tried to make sure we got enough situational work to coach and teach off of. We had a couple of guys out with a few minor injuries. After five days, this is a team that is going to be fun to coach. They want to be good. We're not very good right now but they want to be good.

“We're talented. It's probably as balanced a team as I've had in the spring - just competitively. The first groups on either side is very balanced and the same thing with the second group, so if you don't come out here with the right mindset ready to compete, you get exposed really, really quick. You can't blend in out there. I remember when Chad Morris

Chad Morris
Offensive Coordinator / QBs
View Full Profile first came in here we had no wideouts and I thought he was going to jump in Lake Hartwell. We had them coming but they weren't going to be here until the summer. Same thing with Coach V ( Brent Venables

Brent Venables
Def. Coordinator / Linebackers
View Full Profile ) - we didn't have any defensive backs. We don't have that scenario. This is a very balanced group - about the same amount of experience on both sides with our first groups.”

On the depth at defensive end

Martin Aiken
RS Jr. Defensive End
#53 6-2, 255
Smoaks, SC
View Full Profile is a guy that is not a complete player, yet, but he can definitely do some things to help us. The biggest thing with him is, is he going to be committed day in and day out. That's been the question mark with him. Talent wise, he can definitely help us. [Albert] Huggins - you can't help but notice him. He is going to be a great player for us at defensive end. He's a clone of Shaq [Lawson]. They are identical when you stand them beside each other, when you watch them practice, their motors. They have similar personalities. We have a really good group. Richard Yeargin

Richard Yeargin
RS Fr. Defensive End
#49 6-4, 225
Lauderdale Lakes, FL
View Full Profile has a bright future for us. He's got a lot to learn but got a bright future. There's a good group on campus and then you add Austin Bryant

“Hunter Renfrow - he's been tremendous as a wideout and we're looking for a second punter. He might be able to compete to be the first punter. He's really talented. We just threw him out there to see how he could do today and he really, really jumped out there. He's a guy that hasn't necessarily surprised anyone because he's a talented young man and that's why we recruited him, but maybe where he is after six months in our program and has gained 20 pounds. He'll help our football team.”

“[Jordan] Leggett is having a quietly, excellent spring. He's been very business-like and very focused. He's been very consistent with his effort, his intensity. I'm very pleased with him. Milan [Richard] and Cannon [Smith] are just a blast to coach. They just love it. They love practice. They love meetings. They love every single bit of it. Coach [Danny] Pearman is loving every day being able to coach those two guys. They've got all of the right stuff.”

*We were able to talk to senior left tackle Isaiah Battle

Isaiah Battle
Offensive Tackle (2012 - 2015)
#79 6-7, 290
Brooklyn, NY
View Full Profile tonight, and he said that he currently checks in at 311 pounds. He then added he wants to be at 320 before the start of the season and said he doesn’t feel like the added weight will affect his mobility.

Mitch Hyatt
Fr. Offensive Line
#75 6-6, 270
Sugar Hill, GA
View Full Profile is working behind him at left tackle. Speaking of Hyatt, he left practice on a cart and was wearing a yellow jersey but Swinney said it wasn’t anything serious.

Mackensie Alexander
RS So. Cornerback
#2 5-10, 190
Immokalee, FL
View Full Profile . I asked him about the other side of the field, and he said that Cordrea Tankersley

Ryan Carter
RS So. Cornerback
#31 5-9, 180
Grayson, GA
View Full Profile had come out of nowhere and was turning some heads.

*Defensive back Korrin Wiggins told us he was working first team Nickel/SAM and at second team safety. Kearse told us he likes what he sees out of Wiggins at the safety spot.