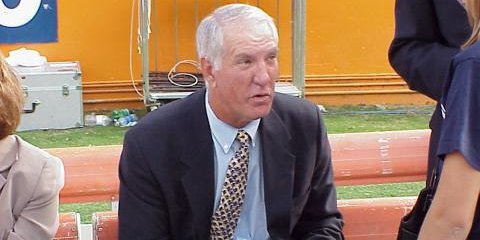 GREENVILLE – Danny Ford knows a thing or two about winning a national championship. He also knows the difficulties of playing the next season as everybody’s main target.

Ford led Clemson to the school’s first national championship in 1981, capping a 12-0 season with a win over Nebraska in the Orange Bowl. The Tigers started out the next season ranked No. 11, but faced a stern test at No. 7 Georgia in the season opener.

The Tigers lost 13-7 in a game that was special for many reasons. The game featured the previous two national champs (the first time that happened in an opener in college football history), it was the first night game at Sanford Stadium in more than 30 years, and the game was moved up in the schedule to accommodate a national television audience on ABC.

Ford said it’s hard to win in college football, and it doesn’t matter if you’re the champion or a middle of the pack team.

“It's hard every year. The more success you have, the harder it is to keep winning, there's no doubt about that,” he said. “It's easy to upset people when you're not very good, and it's easy to get upset when you are very good because people want to beat your butt in the worst kind of way.”

Ford then said he thinks Clemson’s schedule is tougher this season than it was a year ago.

“It's all about the schedule. They have Florida State at home, which is good,” Ford said. “If they had Florida State at Florida State, that would be a lot tougher. They've got Louisville at Louisville and that's tough. That's a whole lot tougher than playing them at Clemson. Auburn at Clemson helps you a lot. Virginia Tech is not going to be easy in Blacksburg. They've got a decent schedule. It's not as good as it was last year because it was pro-Clemson last year and it's probably a little tougher this year.”

Clemson played for the title the last two seasons, and both games were played against Alabama. Ford played at Alabama and coached on the offensive line at Alabama in 1973 before moving on to Virginia Tech and eventually Clemson. He coached at Clemson from 1977-1989, including 12 years as head coach.

As a result, Ford says he didn’t pull for either team in either game – he just wanted to see a good game. He also watched both of them by himself.

“It didn't matter to me. People don't realize it, but I didn't go to either game. I stayed home and watched it by myself and enjoyed both of them,” Ford said. “I was hoping it was going to be a good game. I was hoping it wasn't going to be like several years ago when Alabama played Clemson in Atlanta. I spoke in Huntsville and in Decatur and I told them that Clemson had a pretty good football team and that Alabama better watch out, but it wasn't a good football game and Alabama rolled over them. Now, they can compete. They've got better players and they lined up and played them toe-to-toe and split .500. It was just a really, really, fine football game. I couldn't go wrong. I was hoping the best team won and I believe the best team won in both ball games.”

However, he hopes the programs don’t play again.