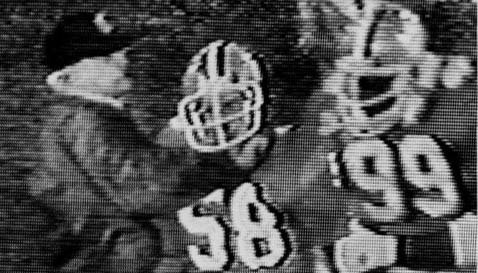 CLEMSON – Former Ohio St. head coach Woody Hayes was given a gift before the 1978 Gator Bowl against Clemson, a gift that wound up being quite appropriate – a pair of red boxing gloves.

Danny Ford
Former Head Coach
View Full Profile as Clemson’s head coach after the departure of Charley Pell to Florida following the regular season, and Ford gathered with the Clemson media Wednesday in the WestZone to talk about that game and the aftermath.

That game wound up being the last for Hayes in a storied coaching career. Ohio State got the ball back after a failed Clemson drive late in the contest, and the Buckeyes faced with a third-and-five at the Clemson 24, second-team Tigers middle guard Charlie Bauman intercepted Art Schlichter when he dropped in coverage. It would be the only interception of Bauman’s four-year career and the only turnover of the night for the Ohio State offense.

On the return he was run out of bounds in front of the Ohio State bench. There was a scuffle that involved Hayes, who wound up throwing a punch at Bauman. Clemson ran out the clock from there, giving Clemson its first win over a Big Ten school. Hayes was given two unsportsmanlike penalties to Clemson on that final drive.

Ford said that in the days leading up to the game, he would attend media events with Hayes and would often be overlooked.

“I had never been to a press conference,” Ford said. “He (Hayes) would get up and talk and I would be in a corner by myself, and I would just listen to him. We had a big banquet, and of all the things, he got up and started talking about the war and Jacksonville and ships coming in. He was a big war guy.”

It was after the Gator Bowl banquet, however, that Hayes received his gift.

“We were at the Gator Bowl banquet, and when he was done, they gave him some red boxing gloves as a gag gift. And after that things just seemed to fall into place,” Ford laughed and said. “I got up there and said all you were supposed to say. And then they gave me a big old thing of Rolaids. That was my first time talking to a crowd of people, so you can imagine how I impressed them.”

Ford said that he was happy to talk about the game, but didn’t see the reason for all the interest in a game that happened 35 years ago.

“Tim (Bourret) wanted me to come over here and get this out the way, so y’all won’t be bothering the hell out of me all of the time. I’m an antique anyway,” Ford said. “This doesn’t have anything to do with what we’ve done other than the fact that we played Ohio State one year in 1978. We had a very fine team put together by Red Parker’s coaching staff and Charley Pell’s coaching staff. I was fortunate enough to be able to coach this program in the Gator Bowl against Coach Hayes.”

Ford said that Hayes tried to call Bauman the next Sunday in order to apologize.

“Everybody knows what happened. A great man and a great coach, it was his last game,” he said. “Some things that people may not realize are that he called and got Charlie Bauman’s phone number – it was on a Sunday – and he called and asked me if he could speak with him. I told him ‘Certainly, but he is in study hall.’ He said that they didn’t have study hall on Sunday night, they only had it Monday through Thursday. In the summer in July, the South Carolina Coaches Athletic Association had a clinic every year at the hotel in downtown Columbia and they got him to be the guest speaker that year. They had standing room only and it was the biggest crowd they had ever had of coaches. That was just about the first time coaches ever came out with beards or mustaches and he chewed every one of them – he told them that you can’t coach with beards and mustaches like that. He was a good man. I’m sorry that it happened against our team.”

He then said that he didn’t know what happened with Hayes and Bauman until well after the game had ended.

“I didn’t ever know it. I was starving to death. I was sick because I was afraid we were going to get the stew beat out of us like we did the year before against Pittsburgh,” he said. “I hadn’t eaten all day, so by the time that game was over with we left the hotel and walked to the beach and found a meatball sandwich about two o’clock at night. By the time we walked back, there were a bunch [of media] waiting in the lobby. I didn’t know anything about it at all. Even when you go back today and listen to the replay after they break to commercial, I think you can hear them say, ‘Did you see that?’

“All I saw was a fight started out there. We did like we were supposed to do and we were taught to do. I ran out there to break it up and one of their boys grabbed me and threw me down and I grabbed my hat and ran back to the sidelines. Let somebody else break it up.”

Ford said that today’s game is a completely different era, but he wishes the Tigers luck in the Orange Bowl.

“This is a whole different team and different era. We wish them well,” he said. “They are playing against a whole different kind of Ohio State team than we played against. They are a different Clemson team than we had. We just hope they have some luck down there against the B1G. At the same time, we hope that South Carolina doesn’t let Wisconsin beat them. We don’t need to let the northern boys get ahead us in football. We need to find a way to beat both teams.”

“When I went to the first meeting for that week – for what time to have your team on the field, television timeouts and all that stuff I never knew about before – the first people I saw were the SEC officials and I was happy to see them because they were the only people I knew. Butch Lambert was from Mississippi and he was on our sideline. His son was an umpire who just retired a few years ago. We had a couple of problems on the field before [the game]. They went on the field about 10 minutes early and I griped about that. They exercised on our side of the field and I griped about that.

“When it came down to the end, I said what happened. He said that one of their coaches hit one of your players. I said, ‘Well dang, I don’t even do that. What are you going to do?’ He said that they were going to give him an unsportsmanlike conduct penalty. I said, ‘I don’t think that’s correct. I think you need to do more than that. He said that they had done all they were going to do. I was trying to show them that I was the head coach and I said, ‘Well Butch, I think I’m going to make history and pull our team off the field and cut the TVs off.’ He looked at me and said, ‘Son, do you want some advice?’ And I said, ‘yes, sir.” He said, ‘If you don’t do something stupid, y’all are going to win the ballgame.’ I said, ‘yes sir, Mr. Lambert. Carry on and let’s do it.’ “