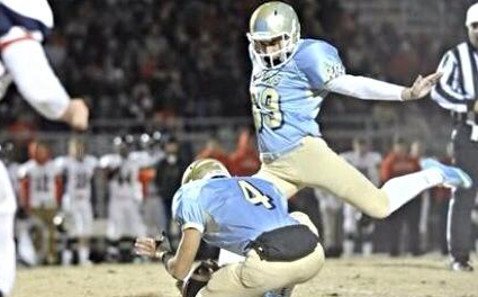 Chandler Catanzaro turned a preferred walk-on offer into a scholarship and an outstanding four-year career at Clemson, and former Daniel High kicker Christian Groomes hopes to follow in Catanzaro’s footsteps.

Catanzaro, a local product out of Greenville’s Christ Church, convinced the Clemson coaches to give him a scholarship after just one season on Clemson’s campus. Groomes, whose big kicks helped propel Daniel into the Class AAA title game this season, got that same offer from Clemson head coach Dabo Swinney

“Coach Swinney’s son Will plays on the junior varsity at Daniel and he dresses out for the varsity, so Coach Swinney has seen me kick a lot,” Groomes told TigerNet Sunday. “He saw me make a 47-yarder earlier this year – it would have been good from seven or eight more yards – and he told me he liked my leg strength. He told me that walking on at Clemson would be an option.”

Groomes then said that he inquired last fall to see if the walk-on offer was still on the table. It was.

“He [Swinney] told me he would love to see me come in and compete for a spot,” Groomes said. “And even though I don’t punt a lot, he told me he liked the fact that I am a left-footed kicker. He told me he likes lefty punters, because of the different spin they put on the ball. It’s something that punt returners don’t see a whole lot, and it can be hard for them to adjust to. The ball just comes off different. He also told me he liked my leg strength, and saw how hard I had been working.”

Groomes took an official visit to Clemson this past weekend, and he said the message from the Clemson coaches centered on family and work.

Groomes, who hit 14-of-22 field goals for the Lions this past season, said he has heard from other programs but wants to call Clemson home.

“My mind is pretty much made up,” he said. “I’ve talked to a few other schools, but Clemson is the place I really want to be.”

Daniel head coach Randy Robinson told TigerNet that Groomes is one of the hardest workers he has been around.

“I am really excited for Christian,” Robinson said. “He has worked as hard as anybody in our program. He has worked non-stop. He has been working with guys and trying to get better and make his game better."

Groomes made 21 of 35 field-goal attempts and 79 of 84 extra points during his Daniel career.