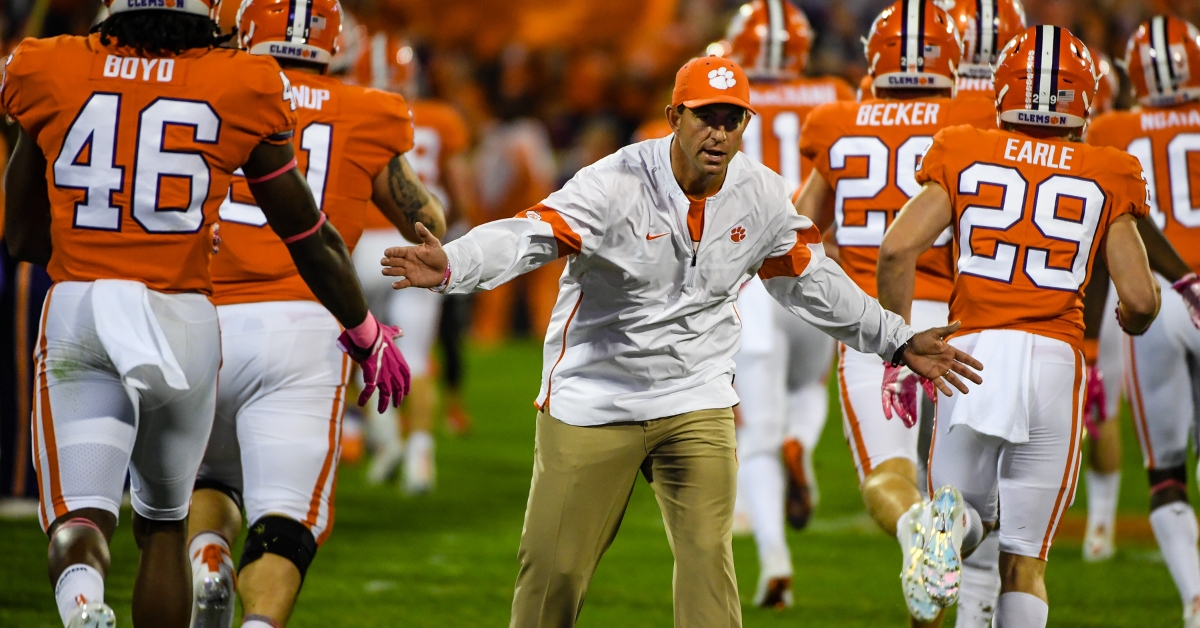 Head coach Dabo Swinney thinks his football team is playing on par, and better in many areas than the 2018 team that finished with a perfect 15-0 season. The team is also playing its best football of the season.

The Tigers defeated Boston College 59-7 Saturday in Death Valley to improve to 8-0 on the season, the program’s 23rd consecutive win. Clemson has outscored the opposition 149-31 since the open date and played its best game of the season in the win over BC. Swinney said molding a team to play its best football when it counts is what coaching is all about.

“That is called coaching, to me. You have so much to teach and grade,” Swinney said on his Sunday teleconference. “I've never been on a team that's played its best football in September. It's a new team and there is a lot to teach. You start to play games and now you've got meetings where you have data and tape and you can teach and grow your team and practice. I don't think you can be a great team if you don't get better as you go. To me, that is just a natural progression. If you are getting worse as you go, that is probably not a good thing. We try to just win the game we are playing and we start teaching.”

Swinney said the Tigers have been better than the nation thinks through the season’s first eight games and he doesn’t see much difference between this year and last year.

“It's not like we want to be bad and it's not like we've been bad. Through eight games we've been pretty doggone good, to be honest with you,” Swinney said. “We've had our spots where I wish we could have done a little better in certain games. But we really have played pretty well. The team last year was the best ever and you just look at this team versus that team and there isn't that much difference. In fact, we are ahead in a lot of areas and could be much further ahead if we left some of these guys in there to play some of these fourth quarters where we've had control of the game. But that's not what it's about for us. It's just about getting better each week and learning and developing morale and developing depth and working on the chemistry of your team. All of those things take time.

“How many teams come out of the gate and people talk about how great they are and then they don't get any better. We try to not get too high and not get too low and work each week and coach and correct and challenge and make the right decisions in personnel or game planning or whatever it is. We just want to give our guys a chance to win every week and hopefully, you have good leadership and your guys respond to the coaching and you get better. That is certainly the case for us. In the last three weeks we've been really close to having a game like we had Saturday night where I think we just clicked on all cylinders. This team is growing into what we want them to be. A very young team - 80 freshmen and sophomores. I am excited about the championship phase of our schedule.”

Swinney agreed that Saturday was the team’s best game this season.

"I'm really proud of our team. Definitely our best game of the year. Very focused and disciplined performance by our team. A great way to head into November for us. I'm proud of the execution. Defensively we were awesome. We held BC to 2.2 yards a carry, 97 yards rushing. A tremendous job. We were well-positioned. We only had one play where we turned a guy loose. They were 2-of-15 on third down. The huge play, the fumble recovery, was a huge play for us.

“I think that's multiple sacks now in 16 straight games. We haven't had that happen here since 2012, 2013. We've won the turnover margin three games in a row. Really pleased with our linebackers and safeties. We missed a lot of tackles against Louisville and we didn't miss a single tackle at safety. They tackled so much better. We got a little high at times upfront and a few alignments weren't great, but I loved their effort and focus for four quarters.”

The Tigers rolled up 674 yards of total offense, the most Boston College has ever given up in a game.

"Offensively it was our best game of the year for sure. We played three quarterbacks and went 25 of 36,” Swinney said. “We were fast, explosive and efficient. No turnovers. That's the first time since the national championship. We were 7-of-13 on third down. The offensive line gave up no sacks. The one we had was on Trevor (Lawrence). We had 13 different guys with a catch, nine with a rush.

"That's 600-plus yards for a third time this year and that ties a single-season record at Clemson. For an offense that has supposedly struggled all year, I think that's pretty good. I love how we are running the ball. We've rushed for 275 yards or more for three straight games. That is the first time that has happened since I've been a head coach. Trevor has thrown three touchdown passes in three straight games. Deshaun never did that. We blocked really well on the second level last night. All in all, our best day.”

In other words, Swinney likes where his team sits currently and where it’s headed.

"We're 8-0. It's where we wanted to be. We're excited about getting into the fourth quarter of our year, our journey,” he said. “I like where our team is. We're going to try to find a way to get to 9-0. We're the only team in the country that's in the top four in total offense and total defense. We want to continue to play smart, have few mental errors and out-big play people. We want to have a really good November."