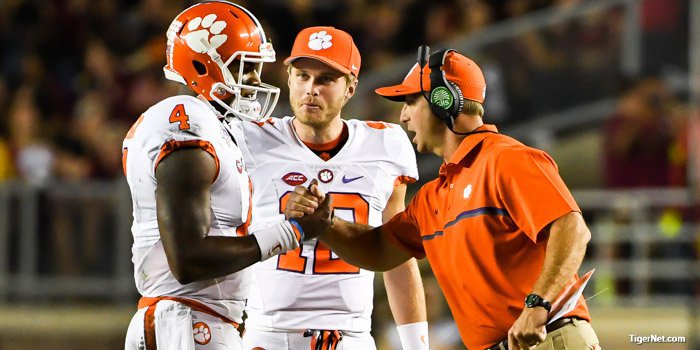 CLEMSON – Dabo Swinney made it perfectly clear Sunday evening what his plans are for dealing with the loss to Pitt.

Clemson lost to unranked Pitt 43-42 Saturday afternoon, and there were enough mistakes on both sides of the ball to keep a coach awake at night. However, Swinney told the media during his Sunday evening teleconference that he plans to flush the game and get ready to take on Wake Forest next Saturday.

“There are definitely some things that we can correct, but we've got a really good football team. It's no different than if we're 10-0. Just because we're 9-1 doesn't change anything about our team,” Swinney said. “The other positive is we still control our destiny. We've got a tough race that we're in the middle of and this is definitely a little setback but it's an opportunity for us to grow from it and that's what we're going to do. We're going to get our minds right and flush it, move on and see if we can find a way to win the division this week.

“A lot out there, so that's how we'll handle it. Moving forward, we've got to get ready for a tough Wake Forest team, who has played well this year, is good on defense and gave Louisville all they wanted yesterday up until a blocked punt and pick six in the fourth quarter kind of got the game in hand. We're looking forward to having an opportunity to get back out there and play this week.”

“Obviously very disappointed, just like everybody else. Ain't no fun to lose. Very disappointed,” Swinney said. “We didn't earn it. We didn't earn the win and do what we needed to do to win the game. Offensively, as I said last night, a lot of good things. We set a ton of records but records don't win games, and you have to finish when you have opportunities. There were a lot of positives- Mike (Williams) and Artavis (Scott) and Hunter Renfrow and Deshaun (Watson) right at 75 percent completion percentage on 70 attempts and 630 yards and all that stuff.

“Third down was phenomenal, and I was really pleased with our pass protection with two freshmen tackles in there. There were some positives but the name of the game is points and the three turnovers and just not finishing in the redzone, that's kind of been an Achilles heel for us, and it bit us in the butt yesterday. If you don't change anything and we convert the redzone opportunities, you win the game.”

Clemson allowed a season-high in points to a Pitt team that lost 51-28 to Miami the week before.

“Defensively, we played better in the second half. Definitely our worst game and we really had no answer for the shovel option - a lot of big plays and a couple of really critical busts,” he said. “Just a ton of penalties. We didn't do a good job in the redzone either. It's one thing for them to get in the redzone, but they were 4-for-4 with four touchdowns in the redzone and if we can hold them to two field goals, then it's a different ballgame at the end. The redzone on both sides missed some opportunities there to get some points back. A lot of mistakes.

“There were some positives. On special teams, we blocked two kicks. Dexter Lawrence blocked an extra point and a field goal. They had the number one return guy out there in the country and really didn't get anything. We had some positives in the game, but the name of the game is find a way to win it and we didn't do that.”

Swinney said the program is used to winning, but he hopes the adversity will bring out the best in his football team.

“We're all disappointed. It's a shame to lose a game, but sometimes that's what it takes to truly appreciate what you've got to do to win, but we'll bounce back,” he said. “It's like I told our team - anybody can handle the good times but a little adversity brings out the best in good people and I know we've got a bunch of good people here and a bunch of good people in that locker room, bunch of good people in the staff room. We're disappointed, but there's a lot of good news. The last time we lost a game, we had to wait nine months to play, that's one thing I remember. We don't have to wait nine months to play, we get to play this week. Not only do we get to play, we get a chance to line up and play for our division title. The other thing is we've got a good football team. We had a bad day, we've not had a bad year.”

Swinney said he wants his team to realize that they still control their own destiny, regardless of what happened around the country.

“Regardless of what happened in those two games, we still control our own destiny, none of that stuff matters. We've got to go and win the next game, that's all we've got to do,” Swinney said. “We've got to go and try to get a tenth win and continue to play, that's the bottom line. It's a long season. As we all saw yesterday, a lot can change in one day much less three weeks. It has never been a focus of ours, and it's not going to be a focus now. Our focus is to go and try to have a great week and see if we can start a new winning streak around here. It's never too late to get a new streak going, and that's what we're going to focus on. We're going to see if we can find a way to beat Wake Forest and if we can do that, then we can flush that one and see if we can find a way to go win another one. That's what we do.”

On health of Watson after throwing 70 passes

“He's sore after throwing 70 passes. I was messing with him earlier today - we are not used to losing around here, and especially that guy. He hasn't lost many times, ever. He had a couple of plays he would love to have back, but he made a lot of great plays. He's good, and he came through the game well. It's remarkable some of the play he made. We had 35 - literally 30-plus - run calls that he converted into passes. Just up and down the field and a lot of long drives. A couple of mistakes, but if you throw 70 passes and complete 75 percent of them that's a pretty amazing day.”

On how Watson will respond

“He is just like how you would expect a champion to respond. Nobody needs to tell D-dub anything. He is very aware of when he makes a mistake and when he plays well and all that stuff. It's just unfortunate because it was amazing what he did. 580 yards of passing with 75 percent completion is unbelievable. It really is and how he managed the game. He is coming off a bruise there that he worked through all week. I was just really proud of him. But at the end of the day when you are the quarterback your mistakes are very glaring, and he understands that. He is disappointed because he knows we had an opportunity to put the game away and we didn't do it. But we had an opportunity to put the game away in several areas, and we didn't do it. He's fine. He's disappointed because he hates to lose. I'm glad he hates to lose. Everybody on this team hates to lose. We didn't really know what to do last night. I'm glad it is not a habit around here, and it's not going to become one. He's just disappointed. He came in today and watched the tape. We talked through it, flushed it and move on. Get ready for the next one. That's what champions do. Nobody cares this time next week what happened last week. We got to go and try to find a way to play better this week and find a way to win. That's what we have done. We have done that very well. We had a bad day yesterday, but that doesn't mean we are going to have a bad year. One bad day don't make a bad year. Our focus is just finishing up and having a great year.”

Willliams’ effort to chase down defender on interception

“Players of the game were Mike Williams - a career night for him - and Dorian O'Daniel played maybe his best game grade-wise. And Dexter Lawrence was our special teams player of the game because of his two blocked kicks.”

Could they move Christian Wilkins back inside with loss of Pagano?

“We'll think about everything. All things are on the table. A lot of that depends on practice and how (Albert) Huggins and Jabril do. We've moved Jabril (Robinson) back inside. Hopefully Huggy and Jabril will step up as well. We definitely have all of those options available to us.”