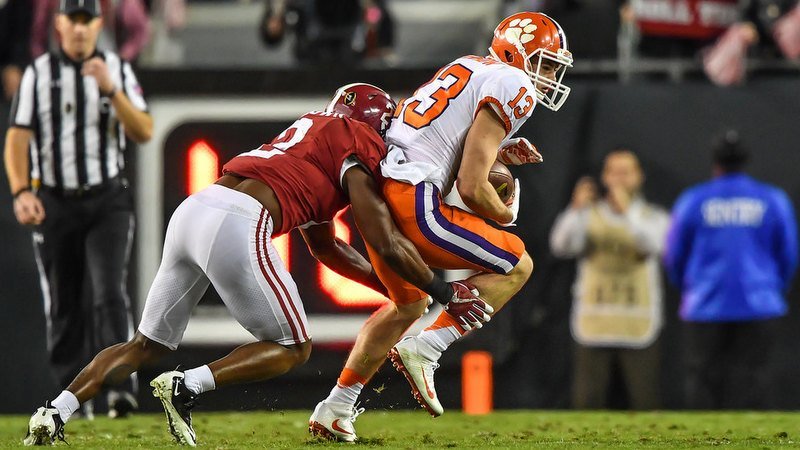 Hunter Renfrow's catch will forever be etched in Clemson lore

And then there was one.

Today we take a look at the undisputed number one.

Swinney promised the Clemson faithful back in 2011 that the Tigers were embarking on the best decade in Tiger history, and while he didn’t promise a National Championship, he did promise that the program would be in the conversation most years. He kept that promise.

The Tigers lost the National Championship to Alabama in 2015, and Swinney made another promise after that loss. 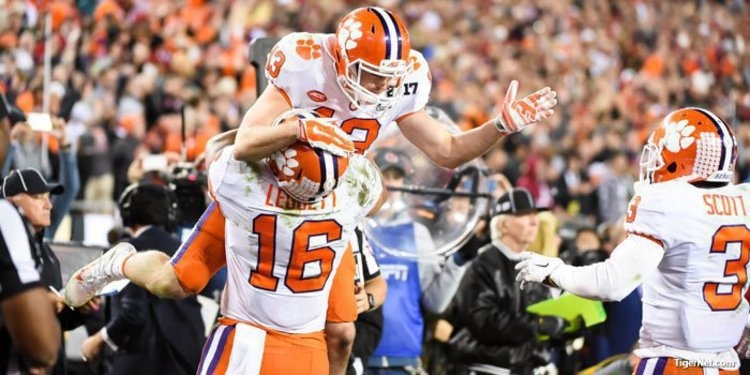 Hunter Renfrow's catch will forever be etched in Clemson lore "

“It’s been 34 years since we’ve had an opportunity, but I promise you it won’t be another 34 years before we’re back,” he said.

The Tigers responded by claiming a spot in the 2016 title game in Tampa, again against Alabama.

At the time, Clemson was a program on the rise. The Tigers were playing in their second consecutive College Football Playoff and were looking for the program’s first national title in 35 years. Against Alabama, the Tigers climbed the mountain and planted the National Championship flag.

Play of the Game – Crush

Crush. The name will forever be etched in Clemson lore, and Hunter Renfrow's name will always be remembered at Clemson.

That’s the name of the play that Clemson ran to perfection early that January morning (it was after midnight), with Renfrow rolling out into the flat and catching the game-winning pass from quarterback Deshaun Watson. It came with one second on the clock and propelled Clemson to its second National Championship.

Clemson trailed Alabama 31-28 late in the fourth quarter of the game. With just six seconds left on the clock, the Tigers had a chance to run one play and go for the win. If the play didn’t work, Clemson would have to settle for a chip-shot field goal that would have tied the game and sent it into overtime.

Scott chimed into the coaches’ headsets and called the play that changed Clemson history.

“The last play is a play that’s called Crush,” Scott said. “It’s worked well for us throughout the year. It was a play designed to get the ball out quickly out there in the flat. It’s a safe throw, and if it was incomplete, we were going to kick the field goal. But we were there to win it. We could have played conservative and kicked the field goal, but Coach (Dabo) Swinney wanted to go for the win.”

Renfrow, a former walk-on who earned a scholarship, said the catch was the culmination of an unbelievable journey.

“Yeah, never in a million years would I have thought this. It's been such a journey for me,” Renfrow said. “It's like I got knocked out in the third quarter and this was all a dream. Credit to – I think my faith in God really got me through, just passing up the money to go to App State and come and playing for a guy like Coach Swinney, and a quarterback like Deshaun is pretty special.”

Alabama had no answer for Watson in either National Championship matchup - the last play heroics just one part in a dominant pair of games.