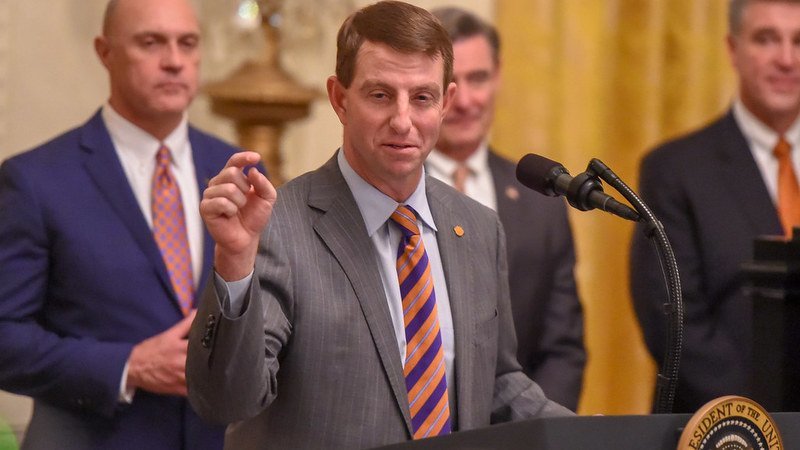 The presentation to justify Swinney's salary is a study in Dabonomics

CLEMSON – Dan Radakovich and Graham Neff called it The Swinney Effect. It might as well be called Dabonomics.

Clemson and coach Dabo Swinney agreed to a 10-year, $93 million deal on Friday, making it the largest deal in college football history. Swinney, who has won two national championships with the Tigers, is on pace to make the same average salary as Alabama coach Nick Saban. Both are set to average $9.3 million per year throughout their respective deals.

Swinney is set to make $8.25 million in the first two years of the new deal, increasing to $10 million in 2028, the last year of the contract.

"I am grateful and humbled by the incredible commitment Clemson has made to me, my family and our football program," Swinney said in a statement. "For more than a decade, we have given our all to provide this world-class university, and our incredible fans the championship football program they deserve -- to live up to Best is the Standard.

The Board of Trustees Compensation Committee met early Friday morning at the Madren Center and, after a few smaller items of business, got down to the business of approving Swinney’s new contract. Unlike previous meetings where we’ve been allowed to attend, this one showed a big difference when Radakovich, Clemson’s Athletic Director, and Graham Neff, Clemson’s deputy director of athletics, walked to the back of the room and started a powerpoint presentation.

I quickly texted my boss and said, “There’s a powerpoint. The numbers are about to get crazy.”

The presentation was broken down into four parts:

In Part 1, the presentation showed how Swinney’s success has increased the value of Clemson’s brand. The chart listed four data points – 2005 (when Swinney was just starting out as wide receivers coach), 2010 (Swinney’s second season as head coach), 2015, and 2018.

In Parts 2 and 3, Radakovich said the university expects that the revenue IPTAY and the athletic department bring in between now and 2023 will be for a surplus of funds.

According to the slideshow, the athletic department is expecting a $1.74 million surplus in the fiscal year 2019, followed by surpluses of $1.8 million, $1.88 million, $1.3 million and $2.46 million in the years that follow.

Radakovich pointed out that Saban has won six titles, Meyer has three and Fisher has one. Harbaugh has yet to win a title at either Stanford or Michigan but has a contract that pays him $7.5 million per year.

However, don’t expect Swinney to leave for Alabama anytime soon. Not with Dabonomics running the show at Clemson.

“I'm incredibly happy that we have now created a great commitment from Clemson to Coach Swinney and from Coach Swinney to Clemson. I think he's a generational coach and there's no coach better for Clemson than Dabo Swinney,” Radakovich said. “I'm very excited to have that put to bed and being able to move forward.

“His representatives were incredible, and we had great help from Chip Hood in our General Counsel office and Graham Neff. His representatives were Russ Campbell, and Patrick Strong really made this whole thing work seamlessly over the last seven weeks when the focus was placed on it. I'm happy for Dabo, Kathleen, and their family. More happy for the Clemson family because he will be here and be our football coach for a long while.”

Swinney, in an open letter to the fans, agreed.

“The magnitude and significance of the financial commitment Clemson has made isn’t lost on me, and to be honest, it is all indescribably humbling,” Swinney wrote in an open letter to fans.

“Last season, our team put together a historic season that we’ve called the ‘Best Ever,’ but as I recently told our 2019 team, the 2018 squad was the best ever … so far. I am proud of our program, what we represent and what we have accomplished, and I am even prouder to say that — now more than ever — the best is yet to come. This last decade has been an absolute blast, and I can’t wait to see what’s in store in the decade to come.”

Two final notes - I saw a lot of posts from people suggesting that tuition at the school would increase in an effort to pay Swinney's salary. That is not the case - Swinney's entire salary is paid through athletic department funds, accoring to Neff.

"There are no student athletic fees at Clemson, there are no institutional allocation dollars to athletics and all of our expenses we pay for with self-generated dollars from IPTAY, the ACC, and ticket sales," Neff said.

"It breaks out and I know in the state salary database it has those numbers, but that is really derived from how Clemson does our benefits thresholds," Neff said. "Those are not separately-paid dollars. That is all still athletically paid."

The "Swinney Effect" Presentation
Get the latest Clemson gear right here!
Comment on this story