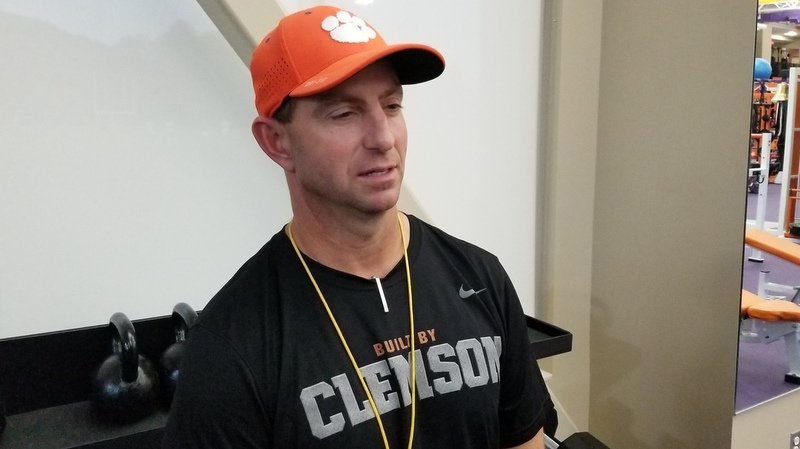 Swinney speaks to the media after Wednesday's practice

CLEMSON - The calendar turns to November this week and that means that members of the Clemson coaching staff will be mentioned for job openings across the country over the next few months. Head coach Dabo Swinney got a head start on the proceedings this week when his name was mentioned in connection with the Cleveland Browns, who fired former head coach Hue Jackson earlier this week.

NFL insider Charles Robinson had this to say about Swinney and the Browns earlier this week:

“Listening to some people around the NFL who know Swinney, I’m convinced he will eventually take a shot at the next level of football,” Robinson wrote. “His backers in the league – some of whom suggested Monday the Browns would be wise to take a big swing for him – have thought about his candidacy down to a granular level. From the potential coaching support staff that Swinney could have lined up quickly, to executives who would be willing to work with him and Dorsey, to how his offense could be tailored to maximize Baker’s growth in the NFL. That’s a lot of thought on a guy who doesn’t instantly jump to the top of most Browns coaching lists.”

I asked Swinney about those rumors following Wednesday’s practice – and whether he would have any interest in an NFL job one day – and his answer was the same as it’s been in the past: Never say never.

“I'd be big in Cleveland, LeBron, Dabo, you know? I am happy right where I am. It's November tomorrow, so about every November there is something that I am getting a job or somebody on my staff is getting a job or whatever,” Swinney told TigerNet. “That just kind of comes with the territory. But Y'all know me and I've always said the same thing every year and any time it comes up - I don't think you can ever say never.

“I live in the now and I don't say 'never' to anything. Who knows, maybe five years from now who is to say that these people may be ready for me to get on a boat in the moat and get out of here. Who knows what the dynamic will be. They may just do away with college football and I'll need somewhere to work. But all I can tell you is that I love my job and I love Clemson. You can look at my track record and I've only been at two places, so I've never been a guy that's worried about the next job. I've tried to be great where I am.”

He then mentioned that he's had multiple job offers.

“I know there are questions. There have been jobs that have been offered to me that nobody knows and that's great because that is how I operate,” he said. “But then you get stuff like this where people will throw your name out for things and it's fun to speculate and people don't mean any ill will, but my complete focus is on Clemson and I hope I am here for a long, long, long, time. I am trying to beat Louisville.”

Swinney then said he visited Cleveland in the spring and liked what he saw.

“It’s cold in Cleveland, too, isn’t it? I hate the cold,” Swinney said. “Ironically, I went to Cleveland in May and it's a pretty cool place. I had never been there. The facility is in a neighborhood I went up for a Cavs game, the Cavs and Raptors, and I've got some friends up there on that staff. We went over to the facility and it's a really cool place and it was a neat city right there on Lake Erie. It was neat to see that. I am sure they will do a great job and get the right guy in there.”