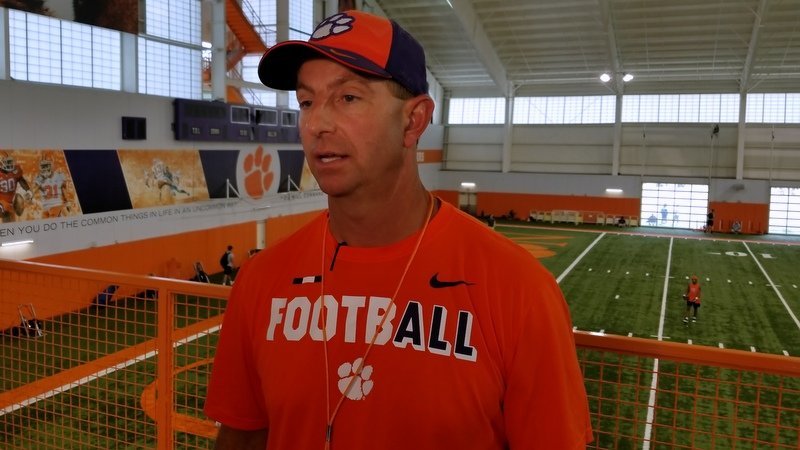 Swinney is a big fan of the new rule change

CLEMSON – Imagine that your favorite college football team suffers an injury to a key player with just a few games left in the season. With a spot in the College Football Playoff on the line, does your head coach use a year of eligibility on a player who might play just a few snaps? It’s happened more than once in the past, but a recent rule change allows the coaches and players more flexibility.

The new rule reforms the redshirt standard. Previously, players were given five years to complete four seasons of eligibility – meaning one of those seasons had to be spent without participating in any games, often during a student-athlete's first year on campus. The same four-in-five timeline exists, only with a catch: Players can now participate in up to four games in a season and still retain that year of eligibility.

Here's an example: A true freshman steps on campus, and in previous years, he might spend his first year lifting weights, dressing out for home game but not playing and working with the scout team. Now, this true freshman will be able to see time in four games while still earning that redshirt season.

“I just heard about that five minutes ago when Thad (Turnipseed) sent me a text,” Swinney told TigerNet earlier this week. “I’ve been at the Rock taking pictures. I literally looked at my phone and it was a clip from Thad, so I really haven’t had a chance to gather my thoughts other than I when I had already talked about it back in January when we talked about it at the convention. I mean that’s awesome, are you kidding me?”

“The fact that you have the chance, that you want to redshirt somebody but maybe it’s a home game or something and you want to give them an opportunity to get a little bit of experience,” Swinney said. “Or maybe you got a guy that’s just not ready, and all of a sudden you have a couple of injuries. It’s at the end of the year and you have three games left and you have a guy that can play and finish it out but not lose a whole year of eligibility.

“Or maybe something in the bowl situations, maybe you’ve gotten a couple injuries or whatever, you’re down on your depth and here’s a kid that maybe hasn’t played all year but he can help you win the ball game. I think it’s great, for the health of the student-athletes.”