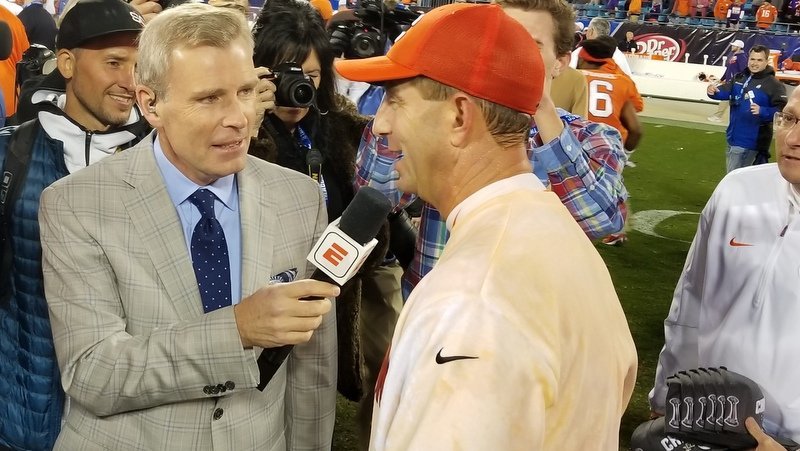 Head coach Dabo Swinney after the win over Miami Saturday

Is Clemson head coach Dabo Swinney a psychic? Have his spiritual powers taken on a new form?

Swinney has been foretold the future on more than one occasion over the past few seasons. Last season, just before the Tigers played Alabama in the national championship, Swinney stood on the practice field at the Tampa Bay Buccaneers’ practice facility, looked over his shoulder at Raymond James Stadium in the distance, and told his team that they would be celebrating a title a day later.

He was right – Clemson defeated Alabama 35-31 to win the school’s second national championship.

A few months later, Swinney walked into the Mercedes-Benz Superdome in New Orleans and had a feeling his team would play there this season. He traveled back to the Tigers’ spring practice and told his team they would make a Sugar Bowl appearance during the College Football Playoff.

That came true Sunday. No. 1 Clemson will face No. 4 Alabama in the Allstate Sugar Bowl on January 1, 2018, at the Superdome in New Orleans, something Swinney says he knew back in March.

“That was kind of a fun moment. I had a chance to go to the Manning Award with Deshaun, and I didn't even realize it until we were flying that way, but it was the first time in 25 years since I had been to New Orleans,” Swinney said, reflecting on Alabama’s win over Miami. I remember we landed, and I was messing with Deshaun. I was like, 'Hey man, that is where it went down, right there. That is where we beat the Canes in the natty.' And the driver says, well that is where the event is. And I thought that was pretty cool.”

The driver put Swinney and Watson out on the floor of the Superdome.

Head coach Dabo Swinney after the win over Miami Saturday "

While he was taking in the scenery, Swinney realized the Sugar Bowl would host one of this season’s semifinal games.

“And that is when I realized that was one of the playoff sites,” he said. “And I took a couple of pictures, and I kind of turned it into a reconnaissance trip. While we were in spring practice, I told the guys. 'Hey, I have checked it out and if we do what I think we can do this is where I think we have a chance to get to.' It is pretty cool to see it come to fruition and excited to be there and obviously excited to play Alabama again. It doesn't get any better than that.”