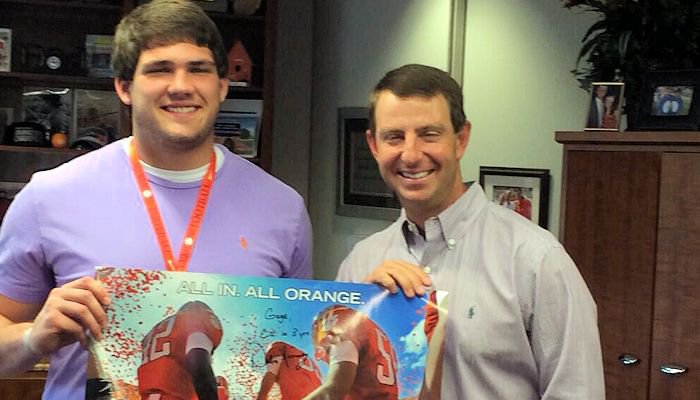 Dabo Swinney
Head Coach
View Full Profile gave to a young high school player three years ago made its way back to Death Valley Tuesday, bringing good news along with it.

The 3-star 2015 defensive tackle prospect out of Greenwood (SC) Emerald gave his verbal to the Clemson coaches Tuesday afternoon, becoming Clemson’s 10th commitment for the 2015 recruiting cycle, the fourth in the last week.

Gage Cervenka
Defensive Tackle
6-3, 280
Greenwood, SC
View Full Profile three years ago, and Swinney signed it, “See you in three years, Gage.” Cervenka, his parents, his sister and one of his coaches made the trek back to Clemson Tuesday for an unofficial visit, and after a 30-minute conversation in Swinney’s office, Cervenka pulled out the poster.

“I had that poster with me, and I showed it to him,” Cervenka told TigerNet shortly after his commitment. “I then held out a poker chip that he had given me, and I held out that chip and told him I was All In. He was excited. He told me I was their first defensive tackle commit for this cycle, and he feels like I can be a leader.”

Cervenka also had offers from Miami, Virginia Tech, Duke, Wake Forest and NC State, but picked up a Clemson offer recently and the Tigers quickly moved to the front of the line. In fact, Cervenka said he never seriously considered any other schools.

As a result, he decided to go ahead and pull the trigger on the commitment.

“I was just talking to the coaches about it, and I grew up a Clemson fan,” he said. “It has been my lifelong dream to play in Death Valley and run down the hill. I felt like everything was right for me. They gave me the opportunity to play for them, and I am appreciative of that. I know they are losing a lot of starters on the defensive line, and I feel like I have a good chance to be able to go in and play. The ball is in my court, and now it’s up to me as to how things will turn out. I am excited.”

Grady Jarrett, Deshawn Williams and Josh Watson are all seniors at the defensive tackle spot, and Cervenka said he hopes he can begin to fill that need.

“The coaches have said all along that the biggest position need they have now is at defensive tackle,” he said. “I am the first one to commit, so hopefully I will start things off and get everyone to come to Clemson. I know I have a great shot to play – they have a couple of players that will still be there, but it’s up to me on whether I have a chance to play.”

“I went to one of the spring practices, and then I went back for the spring game,” he said. “I talked to some of the players, and they remembered me. That made it feel like home.”

Cervenka is also a three time state wrestling champion, and he said that is one of the reasons he feels a connection to Jarrett, a state champion in wrestling in Georgia.

“A lot of people actually compare me to Grady,” he said. “He was a state high school champ. We have the same attitude. He is a great player to be compared to.”

He said his parents are excited that the process is over.

“They are excited. They grew up Clemson fans,” he said. “They are all excited and happy, and they are happy the recruiting process is over and we won’t be stressed out so much.”

Last season, he had 100 tackles, 28 tackles for loss and three sacks.