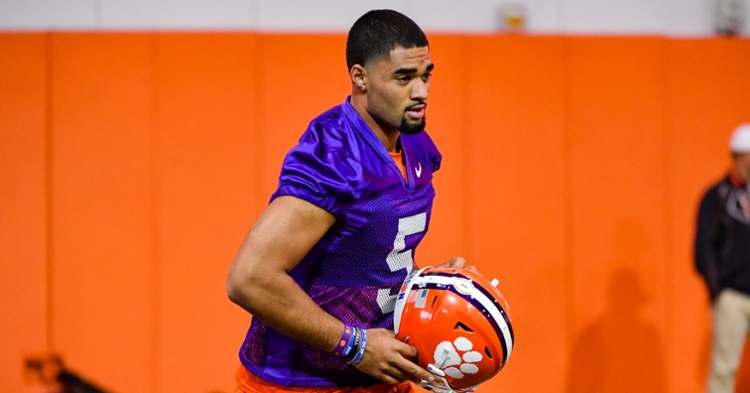 CLEMSON – Head coach Dabo Swinney was ushered into a corner of the indoor practice facility following Wednesday’s practice to meet with the media. The 20-minute session covered a variety of topics, but the real show was happening on the field behind Swinney’s shoulder.

Freshman quarterback DJ Uiagalelei, still bathed in sweat after sprinting at the end of practice, threw with wide receiver Justyn Ross, wide receiver Will Swinney, and any student manager who wanted to run a route.

The throws went to the left. They went to the right. They went over the middle. They sizzled and they spun. He threw while running to his left and running to his right. Ross made a one-handed catch on the sideline after a 30-yard out route – shades of the Alabama game – and motioned that he was done for the day.

In stepped Will Swinney, the rhythmic smacking of the ball into his hands acting like a metronome for Swinney’s press conference.

Starting quarterback Trevor Lawrence stood against one of the walls and watched the proceedings with a knowing eye.

“He looks good,” Lawrence said. “Just kind of the way he carries himself, I feel like we’re similar in that way. So, we’ve got a good relationship, and obviously he’s a great player. He’s picking it up quickly. That’s the one thing I can tell is just he knows football. He gets it. It clicks quickly with him. Even though he doesn’t know all the plays yet, when he sees them once or twice, he’s already learning them and getting them down. So really smart, just a natural. He’s got a knack for the game. So, he’s going to be great.”

Swinney acknowledged the show going on behind him.

“Oh yeah. It’s fun to watch him, especially live,” Swinney said. "I’ve seen him many, many times on tape. So, he can sling it.”

One TV reporter watched Uiagalelei in action and remarked on the freshman’s 6-5, 245-pound frame. Lawrence agreed.

“He’s huge. He’s full-grown already,” Lawrence said. “He doesn’t have to put on any weight or anything, so it’s a little different from me. But obviously he’s a great player, great guy.”

It was just two years ago that Lawrence was in Uiagalelei’s shoes – the highly-touted freshman starting new, and he remembered how former quarterback Kelly Bryant took him under his wing. Lawrence is doing the same thing for Uiagalelei.

“For sure,” Lawrence said. “Obviously we’ve been meeting as quarterbacks and as an offense a few times together, but I’ve taken the QBs in there probably a couple of times a week to get in there and start looking at some of the installs because it comes quick. When practice starts, it starts piling, so just trying to get him started on that and get him thinking before it gets here.

“So we’ve done a lot of that, and like I said he’s picking it up quick. He’s going to get it, it’s just a matter of practicing it and repping it. It’s not going to be perfect in the spring. I went through the same thing. So just practicing it, and he’ll get better every day.”