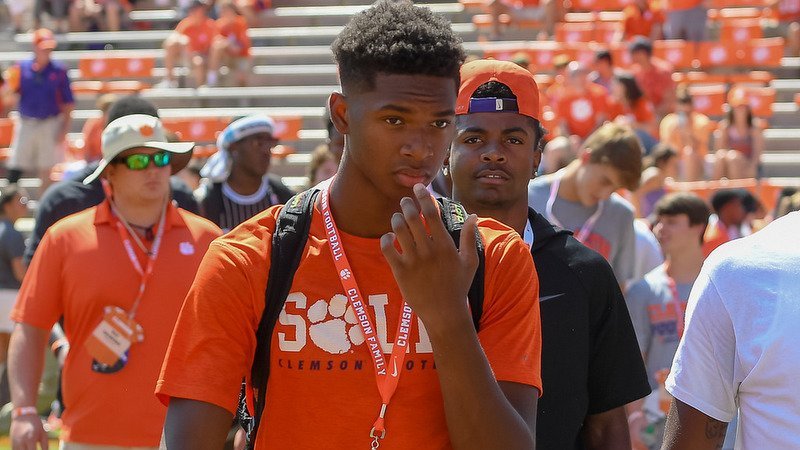 E.J. Williams will be making his fifth trip to Clemson

One of the Clemson coaching staff’s top prospects for the 2020 recruiting cycle will visit this weekend, the fifth time he’s been on campus.

Wide receiver EJ Williams of Phenix City (AL) will return to Clemson Saturday for the Tigers' next junior day. This will mark his fifth recruiting visit with the Tigers dating back to last September, and with good reason. The Clemson staff sees him as another receiver prospect who can add to the legacy of talented receivers ahead of him.

"I talk to coach (Jeff) Scott and coach (Todd) Bates, they text me about every day," Williams said. "They really just say that I'm a great wide receiver and they feel like I can make an impact. I feel like myself I can make an impact as a freshman if I keep working hard as I do already and keep a straight head."

Scott sees Williams as a 9-man receiver in the Tiger offense.

"The nine-man is the go-to-guy at receiver on the field, and coach (Jeff) Scott told me that's what he would develop me into," Williams said.

Clemson, of course, pulled WR Justyn Ross from Phenix City and out of the grasp of Auburn and Alabama, and freshman safety Ray Thornton is another former teammate. Williams recently visited the two in-state schools and they are not to be discounted in his recruitment.

"They are both coming after me pretty hard," Williams said. "I like both of the schools a lot. They are both great programs."

Williams said he actually grew up a Georgia fan and he has visited there. He's also been to Florida and LSU and was at Florida State's spring game last year.

Williams said he will visit Tennessee Wednesday, Clemson Saturday and Florida State on March 16th. And he plans to return to Clemson for the spring game.

He does not have favorites at this point and is looking at a December decision.