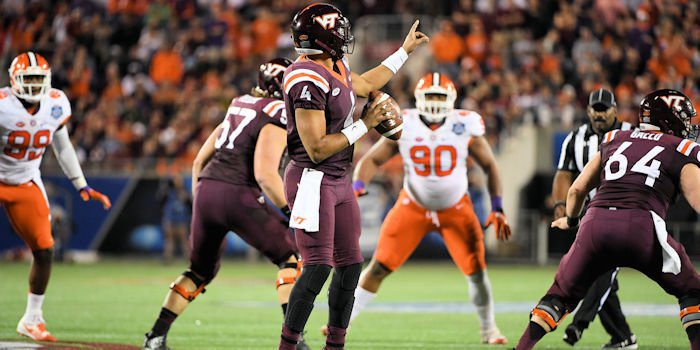 It wasn't a mannequin challenge: this play was supposed to be a designed blitz

ORLANDO, FL – Mannequin challenge. Cover 11. Whatever you want to call it, it didn’t work.

Late in the third quarter of Saturday's ACC Championship Game victory over Virginia Tech, the Hokies trailed 35-14 and faced a 3rd-and-9 with their season on the line.

If the Tigers could force another punt - like they had on the five previous possessions - another offensive score could put the game out of reach.

The down and distance favored the defense.

The football gods and genetics at birth favored the Hokies. It's a play that will forever be etched into the lore of this particular game.

Clemson’s defense had seen that five-wide formation from Virginia Tech before – and expecting a screen pass – dropped 11 men into coverage, allowing Virginia Tech quarterback Jerod Evans all the time in the world to complete a 42-yard pass to Bucky Hodges (who is 6-7) over Ryan Carter (who is 5-9) and completely flip momentum in Saturday’s game.

The Tigers had watched film and noticed that formation – and down and distance – when the Hokies played Tennessee earlier in the season. During the loss to the Volunteers, the Hokies ran a screen.

The Tigers were on the verge of a blowout in Camping World Stadium, but that play and several missed tackles on a 27-yard touchdown run by Trayvon McMillian, allowed an already confident Hokie team to reel off three straight scoring possessions, turning the game into a cardiac thriller – a trademark of the 2016 Clemson Tigers.

Senior linebacker Ben Boulware explained the call to the media following the game, but said if he had it to do it all over again, he would’ve done it differently.

“We thought they were going to do a screen play. That was what we had seen on film with that formation and that down and distance. So we were expecting screen, and for them to pop in and pop out and we were going to knock the ball down,” Boulware said. “That isn't what happened, so he had 30 seconds to throw the ball. We didn't know if we were supposed to stay back in coverage or rush. It was a stupid play. We definitely wish we had done something different. But at the end of the day you have to make a play, and me and all of the d-linemen should have just started rushing him. Instead, we were sitting there in no man's land. Ryan was sitting there in great position but Ryan is 5-9 and that guy is 7-foot-5. But we won.”

Defensive tackle Carlos Watkins, said they immediately figured out what went wrong, but he wasn’t willing to name any names.

“Oh yeah, I was on the field for that one. It was a call that Coach V made where pretty much everybody dropped back and whoever comes free is supposed to get to the quarterback. We figured out who didn't blitz, but I am not going to put them out there like that (laughing),” Watkins said. “That was one crazy play. Coach V, he apologized for that call. He had all day to throw the ball. We can't be caught in a situation like that again or if he's sitting back there for that long, somebody has to go get the quarterback.”

Venables, Clemson’s defensive coordinator, told the media that the call was supposed to be a zone-blitz, but it’s one he won’t call again anytime soon.

“It was a zone blitz, and with their blocking scheme, somebody didn’t read it right. So that was not the way it was supposed to look,” Venables said late Saturday night. “I was disappointed, probably just a dumb call on my part obviously. That is what kind of ignited them there.”