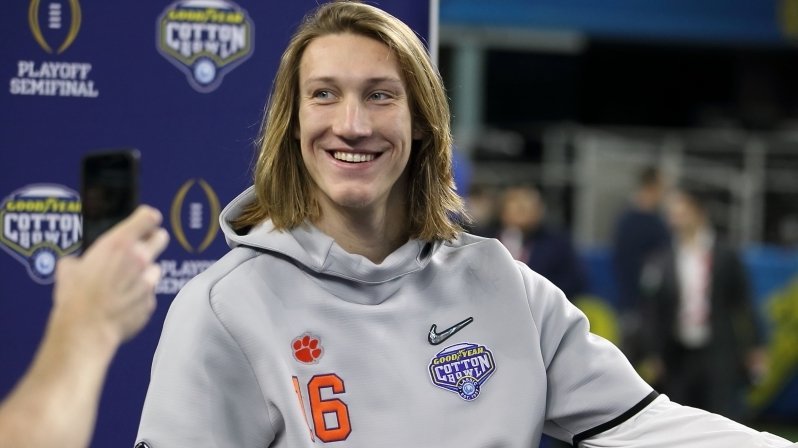 ARLINGTON, TX – The Clemson football team arrived bright and early for Thursday’s Media Day inside AT&T Stadium, and assorted players and coaches answered a bevy questions from the assembled media.

Head coach Dabo Swinney was first on the podium and he talked about the difference in this year’s playoff and past playoff games.

“Well, the timing changed. Dealing with Christmas, that's been a little different. And as far as the -- again, just moving the game up, that's changed a little bit of the length of time to prep by a couple days. So that's really the biggest change, is just kind of managing Christmas this time as opposed to the last few times that we've been in this game,” Swinney said.

“But it's been fun. It really has. It's been a great experience. I really have enjoyed all of it, honestly. And I've been very intentional with that, to just truly enjoy the journey. I've tried to challenge our guys. And just all of it, the preparation, our meetings, our practices, just spending time with these guys because we know we're not going to have much longer with this group.

“Hopefully it goes our way Saturday night, but this could be our last time together with these guys. Hopefully, we can earn one more game. But this has been an incredibly special group of young people to be around and just the daily grind of hanging with these guys and watching them all season has been just a real joy.

“So our prep has been really good in Clemson. It has been really good here. The Cotton Bowl folks have been amazing. They've just made this such an easy experience for us. They have taken great care of us from the transportation, the police escorts, just being able to get to and from practice, to be able to stay on schedule with our itinerary. All those things have been really, really good. 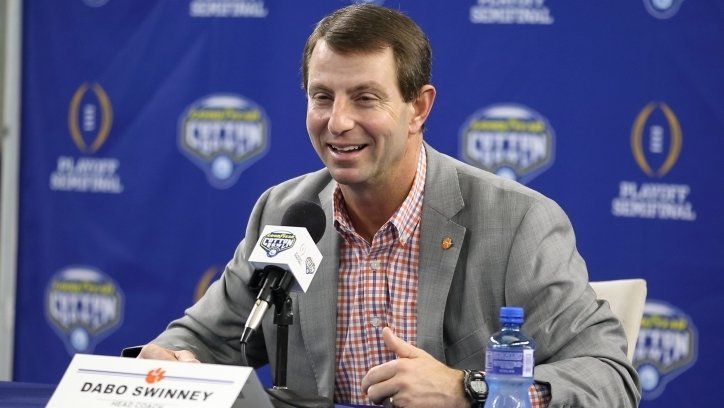 “And to be able to practice here, I mean, this has been amazing because this is very different obviously. So to get acclimated to it I think has been a positive for our guys. But overall, great experience.”

On keeping his head coaches

“I think everything is on God's timing. I think Brent -- he's had several opportunities to be a head coach. He just hasn't had the right opportunity that has gotten him fired up. Brent's not going to do anything if he can't be fully passionate about it. So that's just kind of how he's wired. He loves what he does. He's the best at what he does. But we got a bunch of guys on our staff that are going to be great head coaches. Tony, you said, Jeff Scott. We got a bunch of guys.

“We've got [Brandon] Streeter. We got several guys. You go over on the other side of the ball, I think Todd Bates and Mike Reed would be great head coaches if they got the opportunity. I can go on and on and on. I've got a bunch of guys on my support staff that we're going to look back 15, 20 years from now and they're going to be great head coaches. So, you know, I don't know. And several of these guys have had some opportunities. It just hasn't been the right fit for them to walk away from where they are. But I love to see my staff get opportunities that they want. And at some point, that will happen for them.”

Was the win over Notre Dame in 2015 a springboard for the program?

“Yeah, I don't really see that as a springboard. I think the springboard to our program was 2010, to be honest with you. That sounds crazy. We won six games that year. But that's kind of, for me, when I knew that we really had the foundation in place, just how I saw our team handle that season, how they competed. And then, the very next year, we won the ACC in '11. To me, that was kind of the -- we won the division in '09 and then we come back in '11 and win the league, win ten games for the first time. Now we're at eight 10-win seasons in a row. To me, that was kind of the pivotal moment. You know, Tajh Boyd taking over in '11 and leading us to that first title. We just kind of went from there. But, certainly, that game in '15 was one of those steps.

“I think we've made a lot of steps along the way, and that was definitely one of those steps because it was game day. Both teams had been off for 16 days, if I remember correctly. For whatever reason, we had this crazy layoff. And I believe we had just won up at Louisville, a big win. We knew we had a good team. It was Deshaun's [Watson] sophomore year, and we were somewhere top ten maybe, nine or ten. And they were two or three or somewhere up in the top five, if I remember correctly.

“It was one of those games where, if you lose it, you weren't going to be out of it, it was early in the season; but if you win the game, you got a chance to really position yourself well at that stage of the season. But it was just a lot of emotion in that game. It was game day. And Clemson people had been looking forward to that game since it was announced because they hadn't played them since the late '70s, Joe Montana, last-minute drive, big shocker there. So it was just a lot of buildup to it, a lot of energy, a lot of emotion for both teams. And then it was a hurricane on top of it.

“I literally remember late -- sometime in the third quarter, you literally could not see across the field. I mean, it was unbelievable. But it was one of the funnest games I've ever been a part of it. It's an epic game. It's a shame that somebody had to lose.

“But for it to come down to a two-point play, and I still have visions of Ben Boulware slapping his head and doing forward flips all across the field, getting up, celebrating. It was -- it was an awesome moment. Travis Blanks and Kevin Dodd, all those guys that were in on that play, it was special.

“And I think that was, again, a national win for us, if you will, out of conference, that gave that particular team a nice little boost going into the rest of the season. But there were a lot of big wins in that season, for sure. There was some big ones, a lot of close games.”

On being a freshman and playing on this stage

“I mean, to be in games like this and to be playing at this point was one of my dreams and goals. So it's not that I didn't expect it. But I guess, just like I said before, how everything happened, how everything unfolded has definitely been different than I would have thought. But, I mean, it's just been awesome. Really blessed to be in a situation. Really helped. And I'm grateful to everyone who helped me get here and everyone who is with me here now.” 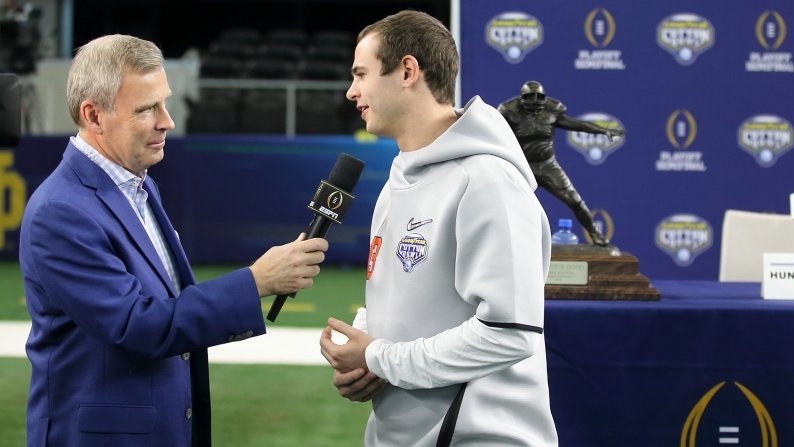 How much he has changed since the start of the season

“Yeah, there's been a lot of changes. I would say more just mentally. Understanding things better. That kind of stuff. I haven't really put on any weight. It's tough in the season. But no, just understanding and making better decisions, when to throw the ball away, stuff like that.”

What has allowed him to be the way he is

“A lot of people make a big deal about last year's team, how we didn't finish the way we wanted. And we didn't. But I thought we had a great year. And I thought that we were in position. And the way we practiced last year, we just did -- somewhere on game day, we just didn't perform well. So I think we can take lessons from that, from last year in that game. Everything is working towards that game, not just having a good week of preparation. We have to have a great week of preparation. But we have to have -- we have got to focus in on game day instead of losing.”

On getting back to championship game

“Yeah. I mean, we have our five goals at the beginning of the season -- win the opener and then the State and then the Atlantic and ACC -- or I guess it would be the division and the state and the ACC and then the closer. So we really just focus on those. We try to keep it simple. We try to not have a broad brush and just kind of throw it against the wall and see what sticks. We try to have specific goals that we want to accomplish. And, if we can attack those goals one goal at a time, we'll be successful.”