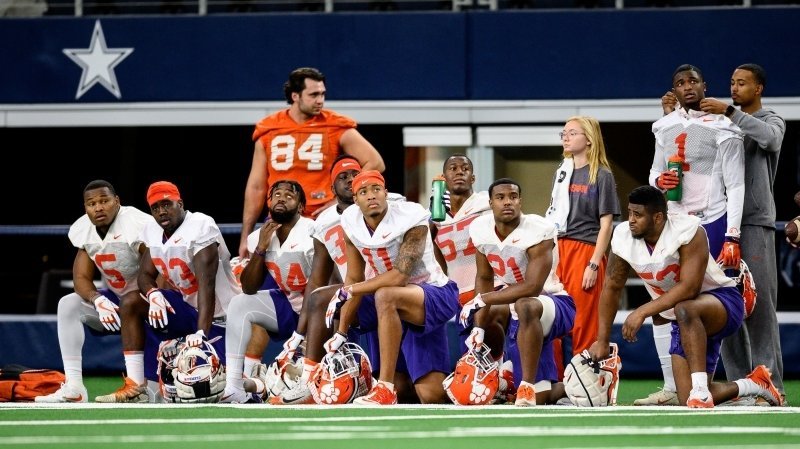 DALLAS, TX – No. 2 Clemson is a double-digit favorite over No. 3 Notre Dame, and the Irish say they love the underdog role.

Clemson and the Irish tangle in the Goodyear Cotton Bowl Saturday, and Notre Dame is an underdog for only the second time this season and the first time since the opener hosting Michigan (3 points; won 24-17).

Not only are they an underdog - but by 12.5 points as of Wednesday evening. Are the Fighting Irish feeling disrespect?

“We're honestly not paying much attention to that,” Notre Dame free safety Alohi Gilman said. “We like being in this position. We have been in all season. There have been times where people didn't think we would win certain games throughout the season.

“We like being the underdog and every game is an opportunity to show the opportunity what we're all about.”

For Clemson, this is the first bowl the Tigers have been favored in since the 2012 Orange Bowl (2011 season).

*Clemson’s defensive line has earned plenty of praise from the preseason on, but Christian Wilkins has the same level of respect for the other side in the trenches.

“Still to this day I think one of the best O-line I've faced was that 2015 offensive line,” Wilkins said of the last matchup with Notre Dame in Memorial Stadium, a 24-22 Clemson win. “ I think they had four or five starters go in the first round of the draft if I'm not mistaken. And just really talented O-line. And when you think Notre Dame -- well, me, personally, when I think of Notre Dame I always think of a very good offensive line. That's no different now.

Notre Dame was named a semifinalist for the Joe Moore Award, which goes to the nation’s top O-line.

*The number of Tigers making an impact in a top-5 Clemson offense in yards and scoring is impressive to the Fighting Irish group, which is no slouch at No. 4 in defensive S&P+.

“I think Clemson has done a great job of sharing the ball a lot,” Gilman said. “Obviously the quarterback is more than capable, so we definitely have to be aware of that. He has the ability to make the throws all over the field. Some teams we played had the tendency to go to a certain receiver more than others.

“Lawrence, he spreads the ball and knows where he wants to go. He makes any throw from the field to the boundary. Spreading it all out. For us, it's about adapting to that and being strong in our execution.”

“If we can't stop the run, we'll be in trouble,” said Tranquill. “If they're able to establish a good run game - and off that, get us with play-action pass? It's' going to be a long day for us. We have to stop No. 9 and stop the run game.”

Gilman talked about the challenge with Etienne.

“He's explosive. Once he hits the seams, he's gone,” Gilman said. “We have to make him go East and West. And be able to execute our scheme.”

Concern, however, is a bridge too far in Notre Dame’s mindset coming in versus Clemson.

“It's nothing really to be concerned about,” said linebacker Te’Von Coney. “We know that they're really talented. We respect them and we know that they have great players and we're going to have to make plays. Which motivates us to put us in the right positions and we know that our coaches will do that. We just have to not think about it and go out there and make plays.”

*Notre Dame quarterback Ian Book hails from California, and he told the media Wednesday that he grew up without ever seeing a firefly. While on a visit to South Bend, with his parents, the trio rented bicycles and was touring campus when dusk fell. The fireflies came out and Book said he was sold on the Irish.

*Jeff Scott smiled Wednesday when he was asked if the coaches knew Trevor Lawrence would be this good.

“Yes. I'd be lying if I said no. I mean, we watched him very similar to Deshaun [Watson], you know, since he was a freshman in high school and you could just tell,” Scott said. “You can see it when a kid has that "it" factor and is special and, you know, he probably was a little bit further along when he came in in January than maybe we were expecting. Came from a great program at Cartersville (Georgia). Joey King as head coach is one of the best high school coaches in the country. So the scheme that he was running in high school, the way that he was coached, I mean, he's the kind of guy that during his lunch breaks is going into the coach's office and watching film.

“And so I think just his football IQ, you know, you never know that until you get in the meeting room. I think that was a little further along than we expected, but this is not a surprise to any of our coaches because, you know, we knew recruiting him he was going to be the type of player that he is. And going to continue to develop and continue to improve, and that's exciting as well.”

Scott went on to say that Deshaun Watson and Tajh Boyd helped the Tigers take the next step as a program.

“Huge, obviously. I mean, Deshaun, you know, for us offensively, you know, Tajh Boyd was a great quarterback for us and really kind of helped us take that next step,” Scott said. “And I think about going and beating LSU in the Chick-fil-A Bowl. That very talented defense there and everything that Tajh did and then I think Deshaun came in and really took that next step and leading us into the playoffs and obviously the national championship because of a lot of those offensive skill guys we have.”