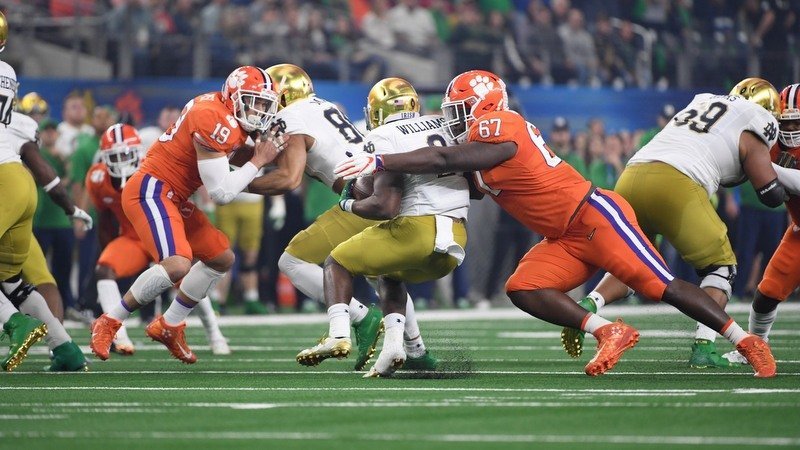 ARLINGTON, TX – There was no luck of the Irish Saturday night in Texas.

After Clark, the American Eagle landed on two different Notre Dame fans during pregame, many Irish fans wondered if luck was on their side. The luck ran out with the opening kickoff of the Cotton Bowl Classic.

Clemson beat Notre Dame 30-3 at AT&T Stadium in Arlington, Texas to punch its ticket to the National Championship.

OFFENSIVE PLAYER OF THE GAME: Have yourself a game Justyn Ross.

The freshman wide receiver showed why he is one of the top wide receivers in the country as he broke the Cotton Bowl Classic record for receiving yards in the first half. Ross was the target of quarterback Trevor Lawrence’s first two touchdowns of the game, both of which were over 50 yards. Ross finished the game with six catches for 148 yards and two scores.

On the season, Ross has five catches of over 50 yards, all touchdowns.

DEFENSIVE PLAYER OF THE GAME: Everyone wondered what Clemson’s defense would look like without defensive tackle Dexter Lawrence, but there wasn’t any drop off. If anything, Lawrence’s fellow lineman played extra hard and that started with defensive end Austin Bryant.

*Replays - The replays – all correct calls – went in Clemson’s favor in the first half. An Ian Book fumble, Derion Kendrick’s fumbled kickoff return, a Notre Dame fumble and a Trevor Lawrence interception. All of those calls were overturned in Clemson’s favor.

*Offense gets going – Travis Etienne broke off a nice run on first down and Lawrence hit Trevion Thompson for six yards and a first down on the second play. With a 1st-and-10 at the 48, Lawrence saw 1-on-1 coverage on the outside and dropped a beautiful 52-yard throw into the hands of Justyn Ross for the game’s first touchdown. The extra point was blocked and Clemson led 9-3 early in the second quarter. The reception was Ross’ 5th reception this season of 50-plus yards.

*Etienne breaks free – The teams muddled through much of the third quarter but the Irish put together a drive late. They reached the Clemson 26, but back-to-back sacks of Book made it 3rd-and-22. Book forced a pass into coverage and it was intercepted by Nolan Turner, who returned it 24 yards.

STAT OF THE GAME: Notre Dame came into the game fourth nationally in pass efficiency defense, but Trevor Lawrence had an efficiency rating of 165 through three quarters.

UP NEXT: Clemson will play the winner of the Orange Bowl (Alabama or Oklahoma) for the College Football Playoff National Championship on Monday, January 7 at Levi Stadium in Santa Clara, California.